Sowing the Seeds of Tradition

Bold reds, bright yellows and vivid greens are all the rage on campus for spring, thanks to the work of Texas Tech's Grounds Maintenance crews last fall. 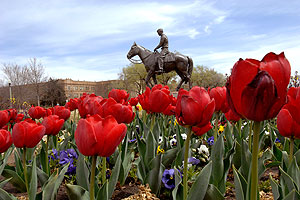 The tradition of planting tulips on the Texas Tech campus began in 1982. This year, crews planted more than 119,000 on the TTU and Texas Tech Health Sciences Center campuses. Download Texas Tech Wallpaper.

A dynamic mix of reds, yellows, whites, purples and greens might not be what you see on the runways in Paris, but that’s what Texas Tech is wearing this spring.

When you think of tulips, you might imagine colorful flower-covered fields in Holland – not in West Texas. With its arid climate, harsh winds, drastic temperature changes and alkaline soil, Texas Tech University has put botanists to the test, creating an oasis on campus.

It takes about 40 crew members, 119,000 tulip bulbs and about two weeks to give the campus its spring makeover. As the months pass and days get longer and warmer, the campus community is treated to a wash of red and yellow to welcome in the new season.

“The first tulips were planted in 1982,” said Gene Gibson, managing director of Grounds Maintenance. “We wanted to plant flowers with vibrant colors, since the grass wouldn’t green up until later.”

Out of the many varieties and colors of tulips to choose from, grounds crews settled on only two, the Golden and Red Apledoorn varieties. The flowers, which grow 14 to 18 inches tall, are a surprisingly nice fit to a West Texas climate with cool winters and warm, dry summers. With a large flower head and strong stem, these towering tulips are some of the most weather resistant of all garden tulips and are known for standing up to storms and high winds, which can be treacherous in this part of the country.

“The winds can be pretty hard on the plants, but the flowers are pretty resilient” said Gibson. “Sometimes we get a late snow and it is beautiful seeing red and yellow blooms in contrast to the white snow.”

From Brown Bulbs to Brilliant Color

Although the flowers don’t bloom until spring, sowing begins in the fall around November. Grounds crew members can be seen crowding around flower beds and hovering over buckets of bulbs, ready to create a masterpiece. Usually working in teams of two, one person uses a large auger to drill holes in the beds while another follows behind with a bucket of bulbs, tossing them in one-by-one with precision and grace. The bed is then raked to make sure each bulb is completely covered and protected during the winter months.

Speed is the key for team members who move from bed to bed like a well-oiled machine. This year, crews planted 28,000 red tulips and 30,000 golden tulips on the main campus and 26,000 red and 35,000 golden at the Health Sciences Center. At the same time they also plant white and purple kale and multicolored pansies, which are hardier plants and last through the winter months.

Once finished, the waiting begins – approximately four months. The crew’s hard work is finally visible sometime between late March and early April, when the colorful blooms begin to emerge and the Texas Tech campus becomes a velvety sea of dynamic red and yellow surrounded by accents of purple and green.

The blooms only last about three weeks, but during those few weeks, the campus comes alive with color and Red Raiders say they are filled with pride for their beautiful campus.

Show us Your Photos

Show us your favorite Texas Tech tulip photos on Flickr.

Watch the tulips grow on our Texas Tech Youtube Channel.

The award-winning Department of Grounds Maintenance is part of the Operations Division of the university. It is responsible for maintaining an aesthetically safe and functional campus for students, faculty, staff and the community.

MSNBC deems Texas Tech one of the “Top Five Prettiest Campuses in the United States."

Springing Up a West Texas Oasis

“I love coming back from spring break vacation to such a warm and spirited campus,” said Kelly Kleinsteuber, a senior public relations major. “With the flowers blooming and trees budding, it’s one of my favorite times of the year.”

Once the petals begin to fall away, the plants are removed and it’s time for another Texas Tech tradition, the Arbor Day planting. Every spring, grounds crews and volunteers join together to replenish campus beds with new vegetation and promote campus beautification. 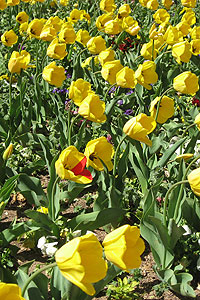 In the fall, crews plant both Golden and Red Apledoorn tulips along with pansies and kale.

Tulips haven’t always been the highlight of the beautiful campus. Believe it or not, during the 1950s and 60s, Lubbock was known as the “Chrysanthemum Capital of the World.” Each fall, Texas Tech and Lubbockites would plant thousands of mums in conjunction with the Lubbock Chrysanthemum Colorama, a festival sponsored by the Lubbock Chamber of Commerce. But by the 1970s, the mums were replaced with red, white and blue petunias due to the high levels of saline in the water. Today, a small number of mums are still planted on campus around homecoming.

Don’t Tiptoe Through the Tulips

It doesn’t matter what time of year you visit the Texas Tech campus, you’re sure to enjoy a visually stimulating experience. Year round, maintenance crews work long hours making sure the campus grounds are clean and beautiful. Faculty, students, staff and the entire Texas Tech community celebrate the award-winning campus and its reputation around the country.

“We take pride in the appearance of the campus landscape, and when the crews are involved in the plans and see the results of their hard work it becomes more than just a paycheck, but a pride in providing beauty to the campus,” said Gibson. “Hopefully we will continue to plant Tulips for many years. They bring such a fresh look at spring and create visual aspirations for the university.”

The beautiful cascading rows of color silhouetted by the Masked Rider Statue, the University Seal and the Administration Building create a picture-perfect atmosphere. Crews encourage the campus community to walk around and take pictures, but only on one condition – keep off.

“We appreciate the students who like to take pictures around the beds and don’t trample the beds. That helps a lot,” said David Lira, grounds maintenance team leader. “We have a great group of students at Texas Tech and I think we have the best looking campus in the nation.”