The longhorn sculpture commissioned by Don and Kay Cash of Lubbock and Clay and Ashley Cash of Midland, will become the 17th steer in the NRHC herd. 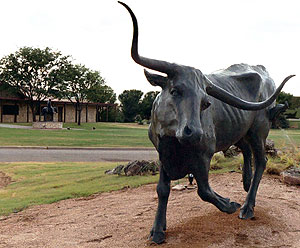 The longhorn herd located outside the National Ranching Heritage Center, commemorates the Texas Trail Drive Era of the 1860s to the 1880s.

A larger-than-life size bronze steer sculpture will join the herd currently in front of the National Ranching Heritage Center (NRHC).

A dedication will begin at 1 p.m. March 7 in Gibson Memorial Park in front of the center, located at 3121 Fourth St. The steers are created by artist Terrell O’Brien, a native of Lamesa. This steer, which brings the herd’s numbers to 17, was commissioned by Don and Kay Cash of Lubbock and Clay and Ashley Cash of Midland.

“This is the 29th piece of outdoor art permanently installed on the National Ranching Heritage Museum grounds,” said Jim Pfluger, executive director. “The heritage center has one of the largest collections of outdoor public art in all of West Texas.”

The bronze steer project is appropriate to both the history of Texas and the western United States, he said.

“The longhorns lifted Texas from the ruin of the Civil War, and because of the animals, the horseback men who tended them became American’s most popular folk hero,” Pfluger said. “We feel they are an excellent choice for outdoor sculpture at the NRHC museum, which commemorates the history and heritage of ranching.”

The herd commemorates the Texas Trail Drive Era of the 1860s to the 1880s. Each of the sculpted steers is posed differently and wears the brand of its donor.

Don Cash, who serves on the Ranching Heritage Association’s National Advisory Board, is former president, CEO and chairman of Questar Corp. based in Salt Lake City. After retiring, he and Kay moved to Lubbock from where they run their West Texas ranches. Clay, Ashley and their two children reside in Midland, where Clay works for Atmos Energy and serves on the RHA’s advisory board. Ashley’s family has been in ranching for several generations.

The outdoor art project at the NRHC was initiated as part of the master plan for the future of the museum and historical park and made possible through the financial underwriting of individuals and foundations.

The steer dedication and unveiling will be followed by a reception to meet the Cash family. Admission to the events is free with an RSVP. Contact Tim Bynum, business manager/store manager, at the NRHC, (806) 742-0498.