One of the most recognizable mascots in college athletics will make first-ever ride at Dan Law Field Friday. 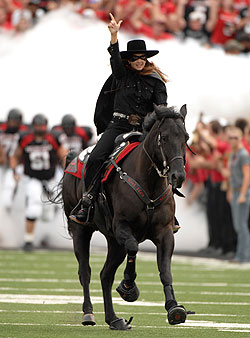 Friday night's ride will be the last for Ashley Hartzog, who retires her reigns as Masked Rider this spring. Photo by Artie Limmer.

Texas Tech Baseball fans will be part of history on Friday night as one of the most iconic mascots in all of college athletics will make a historic ride on the turf at Dan Law Field prior to first pitch of the series opener against Texas A&M.

Ashley Hartzog, the 2008-09 Masked Rider, will be making one of her final appearances on Midnight Matador as her reign as the Masked Rider will come to an end later this spring.

The Masked Rider is a mysterious and striking symbol of Texas Tech school spirit and pride. Mounted on a black quarter horse and wearing a black mask, bolero hat and a red-and-black cape, the Masked Rider has led the football team onto the field for 54 years. Hartzog is the 48th student to serve as the Masked Rider.

Fans can get autographs and photos with the Masked Rider once the game begins behind the stands along the first base line.

Tickets for each of the three games of the Texas A&M series are $11 for adults and $9 for youth and can be purchased in advance by calling the Texas Tech Athletics Ticket Office at (806) 742-TECH. Tickets can also be purchased online at www.texastech.com. The first game is scheduled to begin 6:30 p.m. Friday, April 3.