Three Rawls College of Business professionals address the booming Hispanic population in the U.S. and its economic, political and social impacts. 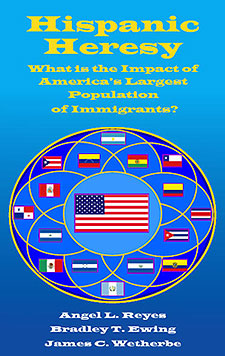 The book by Reyes, Ewing and Wetherbe, is an effort to dispel many of the misunderstandings about how Hispanics in America impact the country's socio-economics. Order online.

As the Hispanic population in the United States booms, fallacies surrounding the economic and social impact of Hispanics on America thrive. Two Texas Tech University professors and an alumnus argue that there are opportunities within the challenges that many people do not see.

In their new book, “Hispanic Heresy: What is the Impact of America’s Largest Population of Immigrants?” the three authors work to dispel many of the misunderstandings about how Hispanics in America impact the country’s socio-economics.

The problems, which are well-publicized, pertain to illegal immigration which can burden the educational, social welfare and medical care systems. Income tax may not be collected and labor abuse may occur.

The opportunity, said Reyes, pertains to the historical value of immigrants and their willingness to take on the entry-level jobs and work their way up to achieve the American dream.

“One of the biggest misconceptions that we try to address in the book is that Hispanic immigration is bad for America,” Reyes said. “On the contrary, Hispanics now represent 42 million people in the United States. That population group represents almost a trillion dollars in economic activity. If demographic models hold, by the year 2050 almost one in four Americans will be of Hispanic origin. What a tremendous opportunity that is the workforce and the face of the future of America.”

A Question of Economics

“We’ve used a descriptive approach to looking at Hispanic immigration,” Reyes said, “and in spite of the vitriol that you hear on cable news and talk radio, we came to the conclusion that Hispanic immigration is actually a very positive thing as it affects the American economy and the United States in general.”

“When a Hispanic consumer spends money, they’re not just limiting money spent to Hispanic owned businesses. That’s part of it, but there are also jobs being created and sustained for all different types of individuals. And I think if we look at the trends in education, in earnings of Hispanics, and in the demographics – age group changes going on – we’re going to see those as important factors of this economy.”

Wetherbe explained that whether immigration is legal or illegal, it’s all about opportunity.

“With illegal immigration the challenge really is about a high disparity between the opportunity of where you’re at and where you’d like to be,” Wetherbe said. “A common find for example, is seven to one; that if it’s seven times better one place than another, people will do whatever it takes, and that’s true of all countries. If you’d gone to the Berlin Wall when it was a barrier between East and West Germany, people would smuggle themselves inside of car engine compartments – they’d risk being shot crossing a border – anything they could do to try to get that better opportunity. The same is true more recently in the United States; people are willing to risk their lives traveling in very perilous circumstances just to get to America.”

Another volatile issue Reyes addresses is the question of immigrants learning English. One camp says that immigrants should be given a bilingual education and another camp that’s equally strong says it should be full immersion and that they should learn English.

“Our book comes out in favor of everybody learning English for a lot of reasons,” he said. “But the most important reason is that to really succeed in America, you must learn English. While a first generation immigrant may never master English, a second generation person, after having gone through our public schools or even our private institutions, will know a fair amount of English. By the third generation, you can almost be assured that the Spanish will be what is lost, not the English. We think it is important because, to succeed in this country in a business sense, in a career sense, you must master English. The global commerce language is English, so we think it’s very important for every immigrant to make every effort to learn English.”

Reyes, Ewing and Wetherbe embrace different political points of view from conservative to liberal. All three authors contributed significant content. Reyes provided most of the subject matter and topics to be covered along with content, stories and perspectives from his personal as well as professional experiences. Ewing did the economic and statistical research and analysis and explained the results and how it impacts the Hispanic community in the United States. Wetherbe provided content including stories, examples, metaphors and analogies to help convey the message of the book. He also managed the overall tone, expression, structure and organization of the book.

Angel Reyes is an attorney with Heygood, Orr, Reyes, Pearson and Bartolomei in Dallas and was named to the Super Lawyers list for 2008 by Law & Politics magazine.

Reyes is a 2008 graduate of the Texas Tech Rawls College of Business Executive MBA program.

James Wetherbe is the Robert Stevenson Chaired Professor of Information Technology in the Rawls College of Business.

Bradley Ewing is the Jerry S. Rawls Professor in Operations Management in the Rawls College of Business.

The authors discuss issues surrounding the booming Hispanic population in America and the impact on the country's socio-economics. Watch.