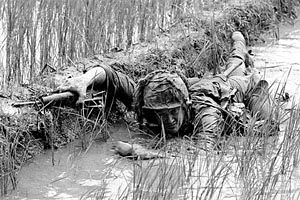 The recently declassified documents review the CIA’s operations in Vietnam, Cambodia and Laos in the ’60s and ’70s. The CIA Center for the Study of Intelligence released on March 13 six volumes of previously classified books detailing various aspects of the CIA’s operations in Vietnam, Cambodia and Laos in the ’60s and ’70s. The works were distributed and discussed at a conference hosted by Texas Tech University’s Vietnam Center and Archive. The documents, penned by CIA historian Thomas L. Ahern Jr., draw on operations files as well as interviews with key participants to review American foreign policy and provide what CIA chief historian Gerald K. Haines calls a sharp analytical look at CIA programs and reporting from the field. Ahern covers topics including the CIA’s rural pacification efforts in South Vietnam, efforts to stabilize and democratize South Vietnam following the fall of President Ngo Dinh Diem, intelligence officers’ failure to identify and monitor munitions supply lines to lower South Vietnam, and failed black entry insertion efforts into North Vietnam. The books, scanned and stored on DVDs, were distributed to participants at the annual Vietnam Center Conference where this years’ topic was Laos, Cambodia, and Thailand and the Vietnam War. Steve Maxner, director of the Vietnam Center, said the documents were released at the conference to ensure that the international slate of historians and other scholars and veterans who attended the event had access to the materials. “One of the rights that Americans take pride in is their freedom to access information,” Maxner said. “The government engages in activities that must remain out of the public eye, and that means that while failures often get a lot of press, many successes don’t. These books present a very honest look at both the successes and failures of the intelligence community during that time period.” Plus, it makes good reading. “These materials are the kind of thing you see in spy books and movies, but this is the real thing,” Maxner said. The Center for the Study of Intelligence was founded in 1974 and comprises both professional historians and experienced practitioners who work to document lessons learned from past operations, explore the needs and expectations of intelligence consumers and stimulate serious debate on current and future intelligence challenges. Ahern was a covert operations officer in the CIA for 35 years and retired from the CIA in 1989 after five tours of duty in Asia, including three in Indochina. He was chief of base or stations in Africa, the Middle East and Europe. After retirement he joined the CIA history staff.

Founded in 1989, the Texas Tech Vietnam Center and Archive houses the largest collection of materials related to the Vietnam conflict outside of the U.S. National Archives.