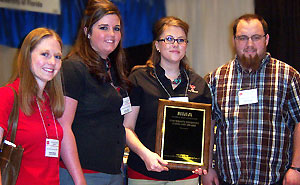 The Red Raider team from the Department of Animal and Food Sciences included:

Blueberry sausage has a bright future in niche markets across the country, said Jennifer Leheska, a human nutrition research consultant for the beef industry and a former Texas Tech meat science doctoral student who helped develop the product.

To make blueberry sausage, Texas Tech researchers added blueberry puree to the sausage during the grinding process, said Mark Miller, professor of meat science. The sausage was then formed into patties and was ready to cook.

“Kids really like the sweetness of the sausage,” Miller said. “In addition, they are getting something healthier because blueberries have zero fat. If you replace some of the sausage with blueberry puree, you decrease the total fat of the sausage, which is a good thing.”

The National Meat Association, a non-profit trade association formed in 1946, represents meat packers and processors, equipment manufacturers and food suppliers who provide services to the meat industry. It has members from the United States, as well as Canada, Australia and Mexico.