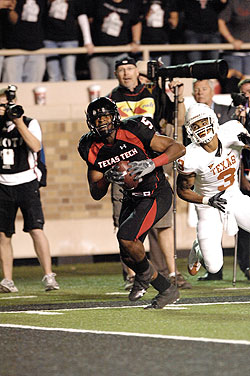 On Nov. 1, 2008, Michael Crabtree shook off a defender and ducked into the end zone for a last second touchdown leading the Red Raiders to a 39-33 victory over No. 1 ranked University of Texas. Photo by Joey Hernandez.

ESPN and the Big 12 Conference, in conjunction with Texas Tech University and the University of Texas, announced Feb. 10 that the 2009 game between the two schools scheduled for Nov. 7, 2009, will be moved up to Sept. 19. The game will be televised nationally on ABC at 7 p.m. CT from Austin.

Texas Tech defeated then-No. 1 Texas, 39-33, last season in a game that was the highest rated of the season for ABC and the fourth-highest rated broadcast in the network’s history of covering college football. The win vaulted the Red Raiders to No. 2 nationally, the highest ranking in program history.

The move to Sept. 19 fills Texas Tech’s original open date and creates a new open date Nov. 7. The conference match-up is the earliest scheduled for Texas Tech since opening the inaugural season of Big 12 play with back-to-back league games at Kansas State (Aug. 31) and Oklahoma State (Sept. 7) in 1996.

For ticket information for the 2009 Texas Tech football season, contact the Athletic Ticket Office at (888) GO-BIG-12 or log-on to www.texastech.com.