Two events will highlight the Center for Military Law & Policy. 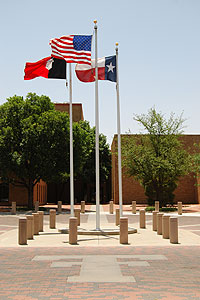 The symposium will focus on the government’s former and current positions regarding Guantanamo prison, interrogation methods, indefinite imprisonments and other concerns.

Texas Tech University’s Center for Military Law & Policy, housed in the School of Law, will host the 2009 National Security Law Symposium from 9-11 a.m. Feb. 5 in the Bill and Carolyn Lanier Auditorium.

As a part of the center’s outreach program, it also is hosting a military hearing for the Court of Appeals for the Armed Forces from noon to 1 p.m. in the Donald Hunt Courtroom, across from the Lanier Auditorium. Both events are open to the public.

The purpose of the symposium is to address the role of lawyers in national security. It is intended for attorneys, law students and general public with interest in the government’s former and current positions regarding Guantanamo prison, interrogation methods, indefinite imprisonments and other concerns.

The panel for the symposium includes: