Mickey and Barbara McKenzie give major boost to $4 million project. 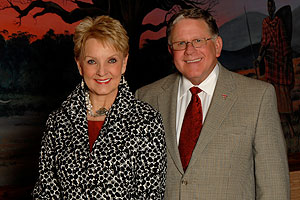 The $4 million capital campaign to double the meeting space in the Texas Tech Alumni Association (TTAA) Merket Alumni Center received a major boost Feb. 10 when a $500,000 donation by Michael “Mickey” and Barbara Esslinger McKenzie of Sulphur Springs was announced by Mark Griffin, member of the Texas Tech University Board of Regents.

The gift represents the single largest donation to the Building on Tradition Capital Campaign for the Peggy and Bill Dean Expansion of Merket Alumni Center. As a lasting tribute to Mickey, Barbara, their children – Chris and Mariah McKenzie Pheiffer, Ryan and KK Kirkley McKenzie – and their grandchildren, the new ballroom that will seat up to 600, will be named in their honor.

“We love the alumni association, but the key to our gift is that Bill and Peggy Dean’s names are attached to the expansion,” Mickey said. “There is a genuine appreciation and admiration for the impact Bill Dean has had on our entire family. He has influenced so many people’s lives in a positive way. How many of us in college have someone who has made such a tremendous impact on them?”

Bill Dean served as adviser to the Texas Epsilon chapter of Phi Delta Theta when both Mickey and his son, Ryan, were members in college.

While they were attending Texas Tech, Mickey and Barbara were active in Phi Delta Theta and Zeta Tau Alpha. Barbara was a dorm legislator, served on the Women’s Residence Council and was a member of the Association of Women Students (AWS). She served as national publications officer for Angel Flight and on the Texas Tech Student Union Program Council. 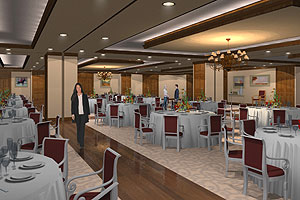 The new Mackenzie Grand Ballroom will seat up to 600 people. The donation is part of the Building on Tradition Campaign to expand Merket Alumni Center.
Make a Gift Now!

Mickey is CEO and chairman of the board of Grocery Supply Company (GSC), the fifth-largest wholesale distributor to convenience stores in the country. The Rawls College of Business Administration named him its Outstanding CEO in 2002.

Both Mickey and Barbara are tireless volunteers in their community and philanthropists who have generously supported many areas at Texas Tech.

During the news conference and reception for the McKenzies, Nelda Laney, who leads the underwriting effort for the capital campaign announced that $2.2 million has been raised since the campaign was announced last October. Rex Isom, who chairs the project steering committee, noted that TTAA is making plans for an early spring groundbreaking.

The expansion project will nearly double the present Merket Alumni Center by adding 10,694 square feet. A new second entrance into Merket Alumni Center will open into The Peggy and Bill Dean Grand Reception Hall. Three new banquet/meeting rooms will be constructed on the west end of the building. Other features include a new serving kitchen with storage; a new circulation, staging and planning office; a bride’s room and new restrooms. The existing kitchen will be remodeled into an office suite for the association’s marketing department. A second courtyard will be built to the east, featuring a gazebo and two large replicas of the official Texas Tech class ring.

Watch the video detailing the Building on Tradition Project.