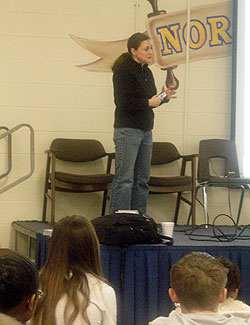 Tigga Kingston explains the Malaysian Bat Education Adventure to students at North Ridge Elementary. Through the program, students will track research, along with the scientists, via Internet.

They walk in single-file lines and find a seat at the folding tables of North Ridge Elementary School’s cafeteria, where smells of breakfast still hang in the air.

It’s Inauguration Day. About 70 fourth- and fifth-graders watch as Tigga Kingston, an assistant professor in Texas Tech University’s Department of Biological Sciences, begins to pull the children into her web of learning. Pictures of different bats flash on the projector screen as Kingston explains in simple terms what her research specialty entails.

Some cringe. Most pay her rapt attention.

That charges the air with a palpable excitement and a quiet hum of whispers.

Frenship Independent School District’s North Ridge Elementary and Halifax Elementary School in Halifax, Mass., are part of a pilot learning program called the Malaysian Bat Education Adventure. And though the kids are staying stateside, they’ll join up with Kingston’s team in the deep forests of Malaysia’s Krau Wildlife Reserve by Internet.

The project will use Kingston’s research into Malaysian bats to develop an integrated biology curriculum. About 250 fourth- and fifth-grade students at North Ridge will track the research through an interactive Web site and communicate with researchers in the field in Malaysia through satellite uplink at least once a week through February and March.

“You’re going to do some really cool things with this information,” she says. “You’ll be looking at how many species were caught at the field site, how many of each species, and you’ll count up your own specific bats and make a graph for each night.” 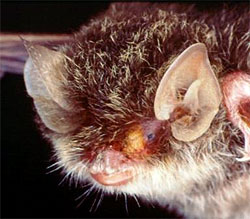 Kerivoula krauensis was discovered for the first time in the 1990s in Krau Wildlife Reserve.

By the end of this century, 20 percent of Southeast Asia’s bat species may become extinct, Kingston says. Caused by deforestation and habitat loss, the resulting impact could wreak environmental and economic havoc on this area of the world.

“Bats are a critical component of the ecosystem,” she said. “In the rain forests of Malaysia, for example, they can make up to 50 percent of the mammal species. In the forests, they are seed dispersers for forest regeneration and they are pollinators of plants. Besides pollinating durian fruit, which is a $1.5 billion-a-year industry, they also help pollinate or disperse 200 types of plants that make about 500 products across Southeast Asia.”

Kingston hopes this project will educate schoolchildren about the important role bats play not only in the jungles of Malaysia, but also in the state of Texas. It’s funded by a $209,000 grant from Texas Tech. She is joined in the project by co-principal investigators Mark McGinley and Kenneth Schmidt, both associate professors in the Department of Biological Sciences.

Debbie Zak serves as North Ridge Elementary’s science coordinator. This is the first time the school has attempted a program such as this one, but she says she believes it will engage the children to learn the way science research is done better than the textbook approach.

“So much of science learning is just reading,” Zak says. “So when we can get them interested in getting and recording the data, they’re going to take a personal interest and responsibility in what they’re doing. The way Tigga’s doing it where each child and his or her partner are in charge of one species of bat is really important too. It’s not just classroom data. It’s their individual data, that’s different from their neighbor’s bat. So that gets the kids really excited too.”

Tigga Kingston is an assistant professor of biology in the Department of Biological Sciences in the College of Arts and Sciences.

The Department of Biological Sciences at Texas Tech hosts a variety of academic degree programs aimed toward the advancement of knowledge, learning, teaching and research of the natural world.