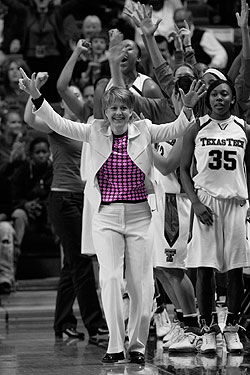 The Pink Zone initiative is an effort for the WBCA's nation of coaches to assist in raising breast cancer awareness on the court, across campuses, in communities and beyond.

Texas Tech's game against Oklahoma on Tues., Feb. 17, will be the "Pink Zone" and "Pack the House" game. Texas Tech will headline an elite group of 15 collegiate women's basketball programs that have committed to participate in the inaugural Women's Basketball Coaches Association (WBCA) Pink Zone Challenge. The event was announced by the University and the WBCA, which are co-sponsoring the event.

The Challenge will be a friendly fund-raising competition, with participants charged with trying to collect the most money through the Pink Zone initiative (formerly known as "Think Pink"), a global, unified effort for the WBCA's nation of coaches to assist in raising breast cancer awareness on the court, across campuses, in communities and beyond.

Texas Tech fans are encouraged to wear pink. The first 5,000 fans to enter the arena will get an Official Lady Raider Pink Zone t-shirt. One-thousand pink pompoms will be given out at the student entrance.

A silent auction will take place at 5:30 p.m. on the west side of the concourse. It will include autographed items and memorabilia from Texas Tech Athletics coaches and players, as well as local merchants.

Breast cancer survivors will be recognized and introduced as guest coaches prior to the games and the Texas Tech Zeta Tau Alpha sorority will be collecting donations during halftime to raise funds for the Kay Yow/WBCA Cancer FundTM and the local Susan G. Komen for the Cure affiliate. Fans who want to take part but are unable to make the game can fill out a Lady Raider Three-Point Challenge pledge form to donate money to their favorite breast cancer awareness organization. All donations are tax deductible and will support various programs and resources for breast health. Pledge forms can be found at www.goladyraiders.com.

United Supermarkets and General Mills have teamed up to help promote this exciting event. Fans had the chance to register at over 44 United Supermarket locations in Texas to win three prize packages. The grand prize winner will receive a Pink Zone gameday experience package, which includes four behind the bench tickets, one hotel room for the night of the game, four tickets to the pregame buffet, recognition on the court during the game, $300 in spending money, four official gameday t-shirts and an autographed team poster and basketball.

The Lady Raiders will be wearing official pink Nike warm-up shirts as well as pink breast cancer awareness ribbons and shoe laces during the game. The coaching staff will also be wearing pink as a part of the awareness.

Breast cancer awareness has a special meaning for the Lady Raiders as two players have been touched personally with family members who have been affected. Kristy Curry, her staff and players are committed to bringing awareness to the sport of women's basketball.

The game is also designated as the NCAA "Pack the House" challenge, in which the Lady Raiders will be competing against other schools across the nation in an attendance competition. This is an opportunity to further develop national grassroots programs aimed at increasing attendance and awareness for women's basketball.

General admission tickets start at $10 and Texas Tech students get in free with a valid student I.D. Groups of 15 or more qualify for a discount and can be purchased by calling Garrett Tressler at (806) 742-1195.

Fans can also enjoy free parking in the lot located at the corner of Indiana Avenue and Texas Tech Parkway.