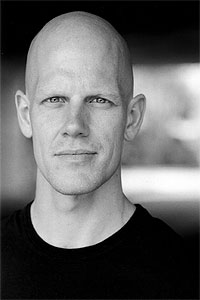 Trampas Thompson graduated from Texas Tech in 1995 with a degree in theatre arts.

The first rays of light broke above the quiet sea. The crisp morning fog surrounding the ships began to lift, raising with it a curtain of uncertainty. In the next breath, shouting and chaos rang out. Men armed with swords stormed the deck. Two enemy pirate ships were at war with each other. One was seeking control of a ship – the other, control of the enemy’s soul.

Trampas Thompson is on board the ship – right in the middle of the fighting. The stage combat classes he took at Texas Tech are really paying off now. These carefully honed skills are a perfect fit for a stunt double onboard the Black Pearl for the blockbuster “Pirates of the Caribbean” movies.

“My mom is always asking when she will see my face and I say, ‘Mom, I am a stuntman. It is my job that you don’t see my face,’” says Thompson.

You may not recognize his name, but it is likely you have seen his work as a stuntman in other Hollywood blockbusters such as “National Treasure,” “Leatherheads” and “Indiana Jones and the Kingdom of the Crystal Skull.”

“I was really proud to work on all the 'Pirates of the Caribbean' movies. I was one of a handful of people who worked on all three from start to finish,” says Thompson. “I turned 32 years old while working on the movie and celebrated on the Black Pearl. Having a birthday party on a pirate ship was something I’ve wanted for 30 years.”

Thompson played one of the Flying Dutchman pirates in “Pirates of the Caribbean: Dead Man’s Chest.”

“I was the one with a puffer fish on the side of my face,” he says. “I got an action figure out of it, so my mom was proud of that.”

Acting may be an inborn trait for Thompson who is named after a character from the 1960s Western-themed TV show “The Virginian.”

Just like the fictional Trampas, Thompson spent much of his time on a ranch in the Texas Panhandle near Channing where his family lived. This small community now has only a couple hundred people left, but at one time served as headquarters for the famed XIT Ranch. Many residents, including Thompson’s family, had ties to a ranching heritage and continue that legacy today.

“It’s a small cowboy community and I think I might have frightened them because of the things I was willing to do,” says Thompson. “But I did learn responsibilities from growing up on a ranch. I woke up every day and had to get my work done and then go to school. When I came home from school, I had more work to do, and then my homework.

Even if ranching was in his blood, riding the range was not the kind of adventure Thompson sought.

“I know my parents never expected me to be a cowboy,” he says. “I would refuse to wear a cowboy hat even if it meant my face would get blistered. It just wasn’t my thing.”

Trampas Thompson is a professional stuntman. He is skilled in swordmanship, fighting, rock climbing, stunt driving, falling from tall buildings and other highly dangerous activities.

He has worked on dozens of television programs and films, including blockbusters like "Pirates of the Caribbean," "Indiana Jones and the Kingdom of the Crystal Skull" and "National Treasure."

Find out more about Trampas Thompson on his Web site.

Texas Tech's Department of Theatre and Dance is part of the College of Visual and Performing Arts. It is accredited by the National Association of Schools of Theatre.

The university is one of two in Texas to offer all traditional degrees in theatre, and one of only three in the southwest to offer a Ph.D. in Fine Arts.

Students in the Department of Theatre and Dance pursue a core curriculum that includes training in the areas of design, acting, directing, dance, stage management, history and playwriting.

Taking the Stage at Texas Tech 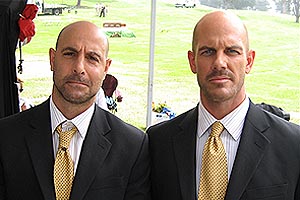 “Trampas was a fearless fighter, and he and I did a lot of free fighting – in a controlled way,” said Nazworth. “He and I knew how to fight safely yet do it in such a way it didn’t look safe.”

That passion for stage combat followed Thompson after graduation from Texas Tech. He did a variety of live stunt and jousting shows across the U.S., including the Robin Hood Stunt Show in St. Louis and the Waterworld Stunt Show in Los Angeles.

Thompson’s family was not so sure their son’s new hobby could actually turn into a career.

"They would ask me 'when was I going to get a real job,'" he says. "But once I started making money in the film industry they were really proud even though they still don’t really get it. I can have the greatest transcendent moment I ever had in the history of art on stage, but it is a fleeting moment and they don’t get that. But, if I’m the referee that gets punched in the face on ‘Leatherheads’ and they see my face on screen, then they are really stoked. My mom does get kind of nervous though. We don’t really talk about everything I do, and I don’t tell her how fast I ride my motorcycle." 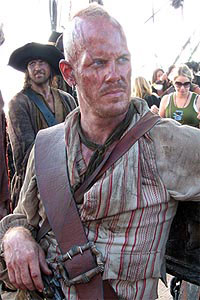 Thompson performed in all three "Pirates of the Caribbean" movies and even has his own action figure.

Friends say Thompson is a definite risk-taker and thrill-seeker, but will not take a job where safety is ignored.

“Everything he does is carefully planned,” Nazworth said. “There is always an element of risk, but he knows being a true professional means he needs to stay in control during the execution of a stunt.”

“Most of what we do a monkey could do. But maybe a monkey is smart enough not to do it!” Thompson said laughing. “Actually, I will not accept a job I think I might get dinged on. If it’s beyond my ability, I’m honest enough, and not desperate enough, to say 'you know what? I don’t think I can do this job.'”

Many of his jobs have put him face to face with some of Hollywood’s biggest celebrities, but stardom has not changed him. On a recent trip back to Lubbock, Nazworth and Thompson helped a friend with a filmmaking workshop and were able to work together once again.

“He hadn’t changed any,” Nazworth said. “We chatted about everything under the sun and life in general. Sure, he does things that are exciting and fun, but he’s still Trampas at heart. He’s got a little more gloss now and knows what sushi is, but other than that, he hasn’t changed. Growing up in Channing gave him that small-town, level-headedness needed to make it in Hollywood.”

All in all, Thompson said he would not change anything about his life and his nontraditional career.

“I love that I can get paid to not work in an office. I love that I can own a motorcycle, ride it at 120 miles an hour, and write it off on my taxes as on-the-job training. I can say I’m from a town of 277 people, and I recognize how blessed I am to have made this journey. It’s like, oh my God! This is what I do and this is where I came from. It’s truly amazing!”