What It Feels Like... To Make the Wheels on Texas Tech Buses Go Round

Mannette Breckenridge has driven a Citibus route on campus for nearly two years. 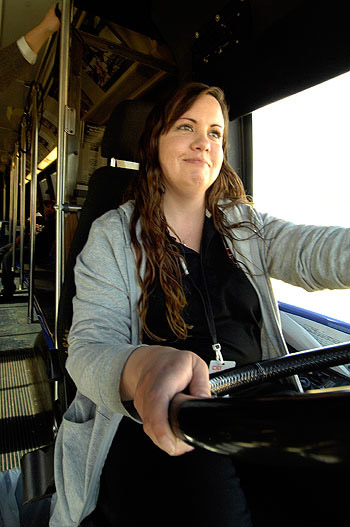 Mannette Breckenridge has driven a Citibus route on campus for nearly two years. She drove the Masked Rider route in 2007-2008. This year, you’ll see her either behind the wheel of a Double T bus or en route to North Indiana stops.

We’re on a schedule; slowing down, speeding up, trying to keep it. Need to go to the bathroom? You work that in – get three minutes ahead of schedule so you have time to take a break.

We’re busiest in the mornings, obviously, but how busy depends on the day: there are more passengers on Mondays and Tuesdays, and the numbers drop off as the week progresses.

When the semester starts, it’s a madhouse. There are so many people who get lost trying to find their way to class, and most of them don’t like to ask questions. I feel bad for them; I want to help them, tell them which route they need to get on, so if I hear someone asking another passenger for directions, I’ll tell them where to go.

Our biggest hazard is people who walk out in front of us. They’re on their cell phones or listening to their iPods, and they don’t even look up. They might think we can just hit the brakes, but if we have a full load of passengers it takes a lot to get the bus stopped.

I was a school bus driver for two years before I started driving at Texas Tech. The biggest difference: discipline. You don’t have to discipline the students around here – they mostly keep to themselves.

You have some students who want to make conversation. You can pretty much tell which ones they are by which door they come through and whether or not they make eye contact.

There’s a difference between freshmen and older students. Mostly it’s their attitude. After they’ve been on campus for a while, they tend to be more laid back.

You do get to know your regulars. When I switched routes, I had a lot of Masked Rider students start getting on my bus because they were used to seeing me behind the wheel – I felt bad for them.

Even though you see the other drivers every few minutes, you wave each time you pass them – sometimes we’ll get goofy and make faces. It’s nice to say hi to everybody and it makes the driving go a lot faster.

You’d be surprised how many people forget things. Mainly cell phones – people are always leaving cell phones. Every once in a while you get a backpack, a book, but it’s mostly phones.

If someone reports a lost item, we’ll radio dispatch and they will check with all the drivers on that route.

If they don’t contact us, we’ll turn it in to lost and found, but the other passengers are usually really good about bringing it up to us, letting us know if they see someone leave something.

I had a baby on May 27th, so I was pregnant all of last year and driving a bus. It wasn’t that hard to drive, but it was hard to get in and out of the bus.

I didn’t complain – the way I look at it, I was pregnant; I wasn’t broken.