When the Buzzer Sounds...It's Time to Play 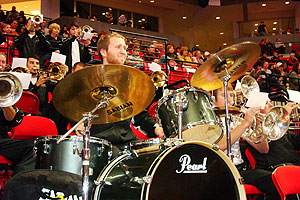 Since 1981, the Court Jesters have performed at nearly every home game and conference tournament.

The basketball coach for the rival team waves his hands, calling for a time out. Both teams separate, their bright uniforms brushing as they jog to either side of the court. In this small window of time between the screaming of fans and the heavy thuds of basketballs hitting the floor, the Court Jesters begin to play.

An all-volunteer band that plays at both men’s and women’s basketball games, the Court Jesters band has entertained and pleased crowds for more than 40 years. And even though the members receive no academic or financial benefits from being in the band, the positions are still very sought-after.

“The kids are there because they absolutely want to be,” said Mike Blass, former administrative assistant in the music program and alumnus of the Court Jesters, where he played the tuba. “Consequently the spirit and energy they have for playing is a lot higher. And we have some of the top students in the music program. It’s highly competitive.”

The band consists of roughly 120 members split equally based on instrument parts into two bands, who share the musical responsibilities. This ensures that players get an equal number of men’s and women’s games, while not getting overworked.

“One of the best parts of playing with Court Jesters is that it is fun,” said Jay Sedberry, a Texas Tech alumnus who played with the band while in school. “The music is fun. It is up-tempo music and the games are usually exciting.”

The Court Jesters currently are directed by Christopher Anderson, the director of the Goin’ Band, and Keith Dye, the assistant director of bands. Steve Knight, Tamey Anglley and Duane Hill, all graduate students, also help direct, organize and lead the group.

To get into the Court Jesters, musicians must audition before the season starts. The tryouts include playing the fight song from memory and sight-reading a piece of music. Only the best are chosen.

“It can sometimes be very cutthroat,” Sedberry said.

These auditions are important because the band doesn’t practice as a whole after the beginning of the season; the time-consuming nature of playing at almost every basketball game prevents it.

The Court Jesters began sometime in the 1960s, under the direction of Dean Killion, the director of bands. Stage bands were very popular at the time, and Killion thought having a band play marching music at the basketball games would encourage school spirit. Sporting matching coats and ties, the first Court Jesters played exclusively for men’s basketball games.

When Keith Bearden took over the director position in 1981, the Court Jesters began playing for Lady Raider games as well, becoming one of the first bands to support women’s programs in the NCAA. They were right there entertaining the crowd when the Lady Raiders won the championship in 1993.

The Goin' Band From Raiderland is the 450-member marching band of Texas Tech University and is under the direction of Christopher Anderson.

And the Beat Goes On