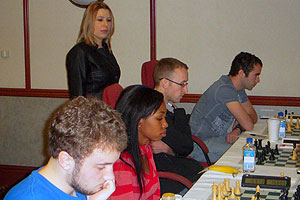 Organized by the U.S. Chess Federation, the championship is open to college and university teams from North, Central and South America as well as the Caribbean.

Knight Raiders Gergely Antal, Chase Watters, Stephanie Ballom and Josh Osbourn finished with an average team rating of 2027, beating out schools in the field of 29 teams such as Yale University, Dartmouth College and the University of Miami despite a relative lack of experience.

Antal won the highest honor of best individual score on tiebreaks playing on board one, tallying four wins, two draws and no losses. Team members are seated from board one to board four, typically with the strongest players playing the top board.

“This was a great achievement for our players, considering that they were competing against far more experienced teams,” said head coach Susan Polgar, director of the Texas Tech’s Susan Polgar Institute for Chess Excellence (SPICE). “They faced higher-rated teams in five of the six rounds of play and did not have the benefit of reserve players to give them a rest.”

Polgar equated this to playing every down of a football game. She predicted that with another year of experience, plus a fresh slate of fall recruits, the team could finish in the top three next year.

“Susan did an amazing job of prepping our players, and each of our players was a hero at one time or another, either winning the games or helping us in various ways when we needed it,” said Hal Karlsson, associate professor of geosciences and team advisor.

The Pan American championship began in 1946. It is staged in a Swiss system format, in which players receive a point for wins and half a point for draws. View the final standings.