February Marks 50th Anniversary of The Day The Music Died 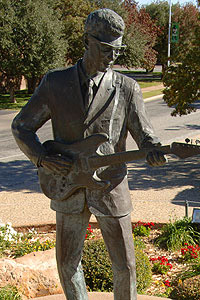 The music may have died in an Iowa cornfield Feb. 3, 1959, but rock ’n’ roll legend Buddy Holly’s impact on music and the legal side of the music industry still raves on today, according to two Texas Tech University experts.

Holly, Ritchie Valens and J.P. Richardson, “The Big Bopper,” died in a plane crash 50 years ago. Holly’s musical career lasted a year and a half, but his talent as a musician grew  phenomenally and would pave the way for future musicians, said Christopher Smith, an associate professor, chairman of musicology/ethnomusicology and director of the Vernacular Music Center at Texas Tech.

Valens, a Latino musician born Richard Valenzuela, played a major role in bringing Latino musicians into American mainstream – a place dominated by white and black musicians, Smith said. And the level of talent that Holly brought would change the way music would sound – plotting the course for the British Invasion of the 1960s.

“The pace of his musical development during that time was almost prodigious,” Smith said. “He took in new musical styles and looked at musical possibilities, then incorporated it into his own musical writing and arranging. He grew like a hothouse plant. But what made him really remarkable was that a young musician in, say Liverpool, England, could sit on the edge of his bed with his guitar, listen to Buddy Holly’s recordings and figure out what he was doing.”

The Beatles, The Rolling Stones, Bob Dylan, Elton John, Waylon Jennings and many other musicians would use Holly’s work as a foundation for their own careers, Smith said. But more than that, Holly’s "regular guy” personality contrasted with Elvis Presley’s animal magnetism and encouraged the not-so-cool that they, too, could rock.

“John Lennon said Buddy Holly made it OK for a guy with glasses to rock,” Smith said. “I think that’s what lives on today in music such as emo and alternative. Holly made it acceptable to be sensitive and incorporate that sensitivity into the poetry of your lyrics.”

Not only did Holly change the music industry creatively, he changed the way artists handle their contracts with recording labels, said Wes Cochran, Maddox Professor of Law at Texas Tech’s School of Law. An extraordinary musician, Holly was also a shrewd businessman – understanding that the more legal control he held over his creations, the more artistic freedom he would get.

Christopher Smith is an associate professor and chairman of musicology/ethnomusicology and director of the Vernacular Music Center in the School of Music.

Wesley Cochran is a professor of law and associate dean of academic affairs at the Texas Tech School of Law.

Cochran, who writes and speaks on topics including copyright, intellectual property and technology issues, said artists before Holly did not produce themselves and would turn the business aspects of their music and recording over to recording industry professionals.

“What Holly did was truly revolutionary in the entertainment industry,” Cochran said.

“He had his own vision, his own sound, and when he insisted on producing his own music, he was laughed at. No one did that back then. But he took control of the business side so that he could control the creative side.”

Additionally, Holly’s actions gave the record industry cause for alarm, seeing that they – the record producers – could be left totally out of the loop, he said. Many artists felt free to follow Holly’s lead and the record executives became more flexible with them so as not to be left out completely.

The Business of Buddy

“Johnny Cash did the same kind of thing,” Cochran said. “He wanted his sound to be his sound.”

Cochran also said that if Maria Elena, Holly’s widow, had not trademarked his name and image, anyone would be able to use his name after Feb. 3, 2009.

“The Texas property code has a provision in it that says that after the 50th anniversary of someone’s death, that person or that person’s family cannot claim any publicity rights which would mean that anyone would be able to use Holly’s name without having to pay any royalties or get permission from his family,” Cochran said.

Since Maria Elena has trademarked Holly’s name and likeness, she will continue to have control over how that image and name are used in commerce indefinitely.

“The advantage there is that protection can be perpetual, as long as the name identifies a good or service used in commerce. That would mean that Maria Elena has to use it periodically, otherwise, the protection will be lost.”