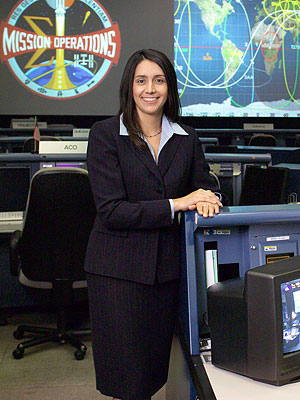 The day before launch, she decided to take a day off and relax.

After all, she’d spent a year coming up with plan Bs and even plan Cs for every failure contingency she and her team could imagine. That’s Ginger Kerrick's job as lead station flight director at Johnson Space Center in Houston. Keep the astronauts safe and ensure success with the mission.

With her feet firmly on Texas soil, the Texas Tech alumna at least transcendentally joined the Shuttle Endeavor’s crew in space during the Nov. 14 mission. She held the lives of seven astronauts in her hands for what would seem like a nerve-wracking 16-day mission to some. But to her, it was cake.

“A lot of people look at this job and think ‘Oh, I can’t do that,’” she said. “Yeah, you can. Anyone who has a bachelor’s in science or engineering can do this job.”

The mission also included four spacewalks to service rotary joints that allow the station's solar arrays to track the sun and generate power.

“A year ago, we noticed some high current spikes, indicative of a lot of friction,” she said, describing the joint issues. “We saw that the ring on the panel’s rotating shoulder looked to be eating away at itself.  So, we didn’t allow it to track the sun. That limits our energy production. So, the astronauts went outside on three different space walks to repair the shoulder joint on one side of the station. While out there, they went to the other side and applied some lubricant to the shoulder joint there.”

Steps to the Stars

This is her dream – one borne of a library book at 5 years old. Since that time, nothing has swayed her or changed her mind. Exploring space would become her primary purpose. And despite the obstacles that stood in her way, she pushed, she fought and she found her way to the top of her career.

“My dad took me to the library all the time,” she said. “One particular trip, I got to pick out a book on astronomy, but in the back, it started talking about manned space flight. I said ‘I want to do this. I want to be an astronaut.’ It hit me then and it never left. When I graduated from high school, my mom said she would help me buy a car or she’d take me to all the space centers. I chose the latter. I said if I wanted to go anywhere, I’d just hitch a ride. I was 17. I knew what was going on.”

That dream helped her through tough times, Kerrick said. Her dad died when she was 11, and her mother had four kids and didn’t work. An academic scholarship got her to University of Texas at El Paso, where she hoped to play basketball, but blew out her knee shortly before the start of the first season. So, she elected to go to Texas Tech University just like her father and grandfather had. And that blown knee served as an impetus for her to apply.

“I wanted to transfer, and I started talking about going to Texas Tech,” Kerrick said. “But my mother said she couldn’t afford it. I started writing to Dr. Borst in the physics department saying I wanted to go to the university and asking him about jobs. He said ‘Why don’t you come down here for a visit?’ We came, and I explained the situation of how I wanted to go to NASA and the financial issues of going to Texas Tech. He sent us off on a tour of the campus. When we came back, he had $4,000 worth of scholarships and two jobs.

“That would get me through the first year. Dr. Borst is the only reason why I was able to go to Texas Tech. He made it possible for me to go. My mom started crying…it was just awesome.”

Getting off the Ground

Walter Borst, professor of physics, said he could tell through that meeting with Kerrick that she was determined to make it to NASA.

“I saw a great potential in her,” he said. “Her mother was a little apprehensive about her little daughter going so far away. But Ginger was rather persistent. We offered her some financial support, and I think that was most important to her in doing her studies here.”

“She got a bachelor's degree, and we encouraged her to stay for a master’s,” he said. “She’s very determined, but on the other hand, very pleasant. You knew she wanted to get far. She was very pleasant to deal with and she always told you what she wanted. I’m very pleased and proud of her. She has pretty much done what she wanted, and she managed to stay there and advance up the ladder. We would like to have many students like her.”

Borst even helped Kerrick get an internship at NASA after graduation. She credits Borst with giving her the chance she needed to make her dream come true.