A Farewell to Archives

James Reckner, professor and founding director of the Vietnam Center and Archive, retires after 20 years of service to Texas Tech. 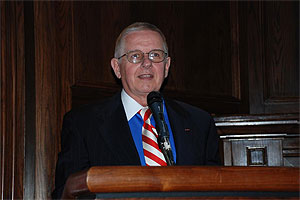 To hear James Reckner tell his story, he came to Texas Tech in 1988 to let ivy grow over his walls while he wrote history books no one would read.

But a funny thing happened on the way to obscurity: Reckner got an idea.

The idea, it wasn’t much at first – the type of brain seed that sprouts up so readily on academic campuses and just as quickly withers beneath the reality of lean budgets and overweight schedule books.

But Reckner, he wouldn’t let this one go. For 20 years this gruff historian and former naval officer stuck with it, pressing, pushing, plowing it forward with the inevitability of a battleship prow parting sluggish seas, through obstructions and indifference and the gentle defeatism that has tripped up so many other well-intentioned endeavors.

And now, a mere two decades after he proposed something as simple as teaching a course on the Vietnam War, he has amassed one of the world’s foremost collections on the conflict, a vast sea of letters and books, photographs and maps to rival even the repositories of the Library of Congress, and – oh, yeah, this part was almost by accident – launched Texas Tech squarely onto the international diplomatic stage in terms of repairing relations between the U.S. and Vietnam.

The idea, it started simple, and it grew into something profound.

The idea became him.

It started with a question, a throwaway. In his first year teaching at Texas Tech, Reckner asked his class: What U.S. general is most closely associated with the Vietnam War?

To the consternation of a combat veteran who witnessed the conflict first-hand through two tours, only one student could give him the answer: General William Westmoreland.

Reckner started thinking. If these students didn’t know the name of one of the most prominent Americans associated with the war, they couldn’t know much about the war. Period.

But what could he do about it? He considered teaching a course on the subject, but even that wasn’t possible – the Texas Tech Library didn’t house enough materials to support graduate research into the subject.

Founded in 1989, the Texas Tech Vietnam Center and Archive is one of the largest collections of Vietnam-era related documents in the world. Only the Pentagon has more material on the Vietnam War.

So Reckner called a meeting of local Vietnam veterans, who agreed to start collecting documents the university could then make available to students. It wasn’t long before Reckner was holding the first contribution, a stack of letters a soldier wrote to his mother in Slaton, and the rest, as they say, is history – the history of preserving history, you might say.

The Place of Study 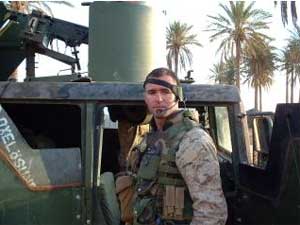 A United States marine is seen stationed in Iraq. The Vietnam Center archives will now collect information on all conflicts involving U.S. troops since the Vietnam War.

Today, the Vietnam Center and Archive at Texas Tech holds more than 20 million pages of documents, photos, maps, books … you name it. Its online Virtual Vietnam Archive provides resources to more than a million historians, students, teachers and veterans each year.

Investigators visit Lubbock to hunt down MIA leads. The Dept. of Veterans Affairs checks records to validate medical claims. Even the Swift Boat Veterans for Truth sought out documents in their infamous bid to gun down Sen. John Kerry’s presidential aspirations, prompting Kerry supporters to wade into the same pool as they sought evidence to strengthen his claims.

In other words, Texas Tech has become the place to study the Vietnam War.

But the scope of the center goes beyond just research. Its symposiums and conferences attract scholars from throughout the world to hash over the experiences not only of the U.S. soldiers who slogged the jungles, but of Vietcong guerrillas and even the protesters who orchestrated sit-ins back home. They all have a place at the table, and they all come.

Vietnamese students attend classes at home thanks to scholarships provided through the program, and Reckner has inked agreements both educational and diplomatic with some of Vietnam’s highest ranking officials.

Prior to his retirement in January, Reckner even parlayed the success of the Vietnam Center and Archive into a new institute, The Institute for Modern Conflict, Diplomacy, & Reconciliation, devoted to advancing international reconciliation and documenting America’s many conflicts since the 1950s.

Yet Reckner describes his success flippantly, with a quip and a shrug, as if his drive to see the program succeed resulted from a character flaw, as if it were really a matter of losing sight of his original goal – to lose himself in academia.

“It kind of scares me when people have a plan and follow it through to the dime,” he says. “What kind of imagination is that?” 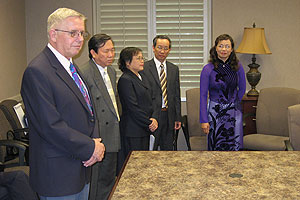 James Reckner meets with Vietnamese officials to formalize a commitment to exchange information with the State Records and Archives Department of Vietnam. Read More.

There is still much of the salty dog about Reckner. He is a man of eye contact and firm handshakes. So it should come as no surprise that when he is asked the inevitable question – what he’ll do with his retirement – Reckner lists work as his first priority.

He’ll be spending most mornings, at least for now, in the Southwest Collection scrolling through microfilm as he finishes his two latest naval history books.

Then he wants to see the U.S. Reckner points out that while he’s visited exotic haunts throughout the world, from Vietnam to ports in the Mediterranean, he’s never had much opportunity to play tourist in his own country.

Beyond that, he remains ambivalent.

“I haven’t stuck with many of my plans in life so far,” he says with a shrug. “I don’t know if I’ll start now.”

He does, however, have a substantial list of to-dos for those taking over the fledgling Institute for Modern Conflict, Diplomacy and Reconciliation. The institute encompasses Texas Tech’s aerospace and military science departments, the Vietnam program and a newly formed Center for War and Diplomacy in the Post-Vietnam War Era.

He also hopes to see construction begin on a new freestanding archive and museum space to house the institute and its components on 12 acres of campus set aside on the corner of Fourth Street and Quaker Avenue.

Such a facility would not only allow Texas Tech to showcase much more of its collection – including four Vietnam-era U.S. Army helicopters donated in 2006 – but would attract more researchers, materials and tourists, he said. It also would provide a place for the university to host functions such as veteran’s reunions and provide a visible sign of the extensive work Texas Tech is doing both in terms of preserving history and advancing diplomacy with the country’s former enemies.

“Texas Tech could be the premier university in the United States for studies related to Southeast Asia and reconciliation,” he said.

So while Reckner may be ready for retirement life, he still has not relinquished hold on his idea.

Here’s hoping the idea continues to grow beyond him.