Groundbreaking ceremony clears the way for east side renovation. 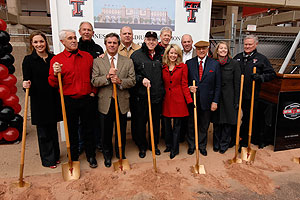 The groundbreaking ceremony kicked off the expansion project expected to be be complete by the 2010 football season. Click to enlarge.

A groundbreaking ceremony Nov. 29 officially kicked off the expansion of the east side of Texas Tech University’s Jones AT&T Stadium.

The $25 million facility will mirror the Spanish Renaissance style of the stadium’s west side. The addition will add more than 500 club seats and 26 new suites. The new building is expected to open for the 2010 season.

“We’ve accomplished a great deal in a short amount of time and it is due to Red Raider fans far and wide,” said Chancellor Kent Hance. “We are grateful for the support of every single individual who contributed to this project.”

About $28 million has been raised since the fund raising initiative began in August. The success of the campaign will allow the extra money to fund the north end zone expansion which will add more seats for students. University officials are still planning this next phase and hope to make announcements soon.

“Finishing out the north end of the stadium will allow us to keep pace with our growing student population and fan demand for season tickets,” Hance said. “We want to continue to build on the success we’ve had raising money to complete the east side of the stadium.”

Completing the east side construction will give Texas Tech one of the most attractive football facilities in the country.

“Jones AT&T is one of the most fan-friendly stadiums in intercollegiate football,” said Gerald Myers, Texas Tech athletic director. “It is a stadium of which students, fans and alumni can be proud. We greatly appreciate the donors who have made the east side expansion possible.”

If you are interested in suites and club seats contact Steve Uryasz or Amy McBride at the Red Raider Club at (806) 742-1196.