Harley Oberhelman inducted into the Order of Don Quijote. 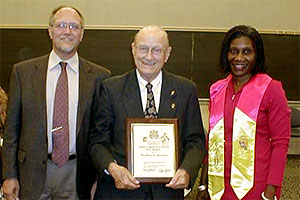 Harley Oberhelman (center) with his son Richard after his initiation into the Order of Don Quijote by Comfort Pratt, Adviser of Sigma Delta Pi (right).

Oberhelman, professor emeritus of romance languages, will be inducted into the Order of Don Quijote, the highest honor awarded by Sigma Delta Pi. The order recognizes service in the fields of Hispanic scholarship, the teaching of Spanish, and the promotion of good relations between English-speaking countries and those of Spanish speech.

“I sincerely appreciate this recognition of my years of service teaching Spanish and bringing my experiences in Spanish America to students and to others at Texas Tech and beyond,” Oberhelman said.

Sigma Delta Pi has more than 550 chapters in the United States and Canada. The Texas Tech chapter recently received Honor Chapter Award for its outstanding activities in 2007-08.