Texas Tech will graduate 2,504 students in the fall ceremonies. 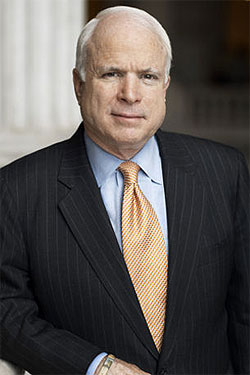 Sen. John McCain of Arizona is the ranking member of the Senate Committee on Armed Services. McCain will give the commencement address at the Graduate School ceremony Dec. 12.

Chancellor Kent Hance will speak at the two undergraduate commencement ceremonies at 9 a.m. and 1:30 p.m., Dec. 13, also at the United Spirit Arena. Texas Tech will graduate 2,504 students in the fall ceremonies.

“We are honored to have Senator McCain speaking at our Graduate School commencement. He is a true American hero who continues to serve his country and I know he will inspire our graduates to strive for success in their professional and personal lives,” Hance said.

The morning ceremony will include the Colleges of Human Sciences, Agricultural Sciences and Natural Resources, Visual and Performing Arts, Mass Communications and the Rawls College of Business.

The afternoon ceremony will include the Colleges of Education, Architecture, Arts and Sciences and the Whitacre College of Engineering.

A hooding ceremony for graduates of Texas Tech’s School of Law will be at 5 p.m., Dec. 13 in the Allen Theatre of the Student Union Building. For more information on commencement visit the Office of the Provost Web site.

Hance became the third chancellor of the Texas Tech University System on Dec. 1, 2006.

Before coming to Texas Tech, Hance was a partner in Hance Scarborough Wright, an Austin and Dallas law firm. His political career began in 1974 when he won a seat in the Texas State Senate. Four years later, he won election to the 19th Congressional District. After Congress, Hance won election to the Texas Railroad Commission. He earned a bachelor of business administration degree from Texas Tech in 1965 and graduated from the University of Texas School of Law in 1968. He returned to Lubbock to practice law and teach business law at Texas Tech. In 1973, he was named an outstanding professor at Texas Tech.