25,000 red, orange and white lights will light up the holiday season at the Carol of Lights 50th anniversary celebration.

The 50th Anniversary Carol of Lights will be held Dec. 5 in the Science Quadron. The Carillon Concert begins at 6:30 p.m. and the outdoor ceremony begins at 7 p.m.

The Carol of Lights Ceremony will be filmed for a video that will be available sometime next year.

The annual Carol Concert follows the Carol of Lights Ceremony in Hemmle Recital Hall at 8 p.m. Tickets for the concert are sold through Select-A-Seat.

The performance will be streamed live via the Web. During the event, you will be able to click the “Web” image and listen to the performance live. Please note that the link is only available the day of the event. Apple's QuickTime player is required to listen; you can download QuickTime here

Behind the Carol of Lights

After more than two months of preparatory work, the Carol of Lights celebration is ready to begin. The lights have been hung and tested, the Christmas tree and wreath are in place and everything is ready.

“I love it,” said Alice Scott, with University Student Housing. “It’s a wonderful tradition and I think we are the only university to have anything like this. I’ve had universities throughout the country call me about this, wanting to know how we do it and what we do. But no one else has done it yet. I think it’s something of which Texas Tech should be very proud.”

This is Scott’s 22nd year to be a part of the planning and execution of the Carol of Lights and she knows exactly what to expect this year.

“We aren’t planning anything different,” she said. “That is the whole point of a tradition.”

From the beginning, the Residence Hall Association (RHA) has been involved in the Carol of Lights ceremony, although it wasn’t called that at the time. The tradition was introduced through a partnership between the RHA and the music department in the 1950s. Gene Hemmle, the director of the music department, got together with a small group of students from the residence halls to sing carols.

Bill Dean, executive vice president and CEO of the Texas Tech Alumni Association, was there for the first gathering at Memorial Circle.

“It was pretty small and pretty insignificant at the time. It didn’t have all the lights up,” Dean said. “It was pretty low key. They sang Christmas carols and drank hot chocolate.”

Let There Be Light

Light was shed on the tradition in 1959, thanks to former Board of Regents member Harold Hinn who provided the funds for 5,000 lights. The initial strand covered the Science Quadrangle and the Administration Building.

The next year the RHA named the tradition the Christmas Sing. It was not called the Carol of Lights until 1961, when the light display increased to 16,000. At the time, Dean was student government president. He, along with interim university president R.C. Goodwin, was invited to flip the switch to ignite the new and improved version.

Through the years the number of lights continued to increase. Today 25,000 red, orange and white lights outline 13 buildings. The six miles of chord stretches from the Broadway Avenue entrance, around the Engineering Key, Science Quadrangle, Administration Building and back to University Avenue.

Kyle Cooper with the Physical Plant electric shop is in charge of hanging the lights, which begins in late September. The lights stay on until the first week when students come back from the holidays. Then the workers are busy, once again, this time removing the decorations.

“It takes anywhere from a month to a month and a half to take everything down,” Cooper said.

But he says all the hard work that goes into the Carol of Lights is worth it.

“It’s great to see the community come out and see what you have been working so hard on,” said Cooper. “It’s one thing to see it, but when you know what’s put into it and seeing all the student organizations come together with us to make all of this happen, it’s just very worthwhile.” 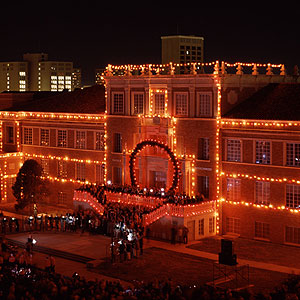 The foundation of the Carol of Lights has remained the same since its beginnings 50 years ago. The holidays are a time of giving and the Carol of Lights is Texas Tech’s present to Lubbock and the surrounding communities. It is a chance to spread holiday cheer as well as show honor and pride for the university. But while that foundation remains the same, the tradition has grown larger over the years, adding special nuances representative of Texas Tech.

Decorations like the 38-foot lighted Christmas tree, 3,000 luminaries lining the sidewalks of Memorial Circle and a 21-foot fresh pine wreath hung on the Physics/Geosciences Building are now part of the tradition.

The evening celebration kicks off with a Carillon concert, from its 43 bells located in the west tower of the Administration Building. The chorus of bells echoes through the crowd building the anticipation for the next phase of the ceremony, when the Saddle Tramps and High Riders begin their stately Torch Light Processional. The Trombone Choir and combined choirs lead the massive crowd in singing carols. The ceremony culminates with a moving soloist performance of “O Holy Night,” and the lights are illuminated.

The Carol of Lights tradition is carried out whether rain, snow or shine. And no matter what the temperature, the crowd of students, fans, friends, family and community members, still gathers to take part in the ceremony.

The ceremony has continued every year except for 1972, when Texas Tech cancelled the event due to the university’s energy conservation policy.

At the 50th anniversary celebration on Dec. 5, Dean once again will be asked to help illuminate the campus, this time alongside RHA president Benjamin Bronson.

“I am very humbled by the whole thing when you stop and think it’s been that long,” Dean said. “Other than the athletic traditions with the masked rider, I think it embodies Texas Tech’s spirit probably as well as anything we do and I am happy to be a part of it.”