Jillian Schmitt has participated in every Celtic Christmas and talks about what it’s like to learn new instruments, an entirely new way to play and … how to dance. 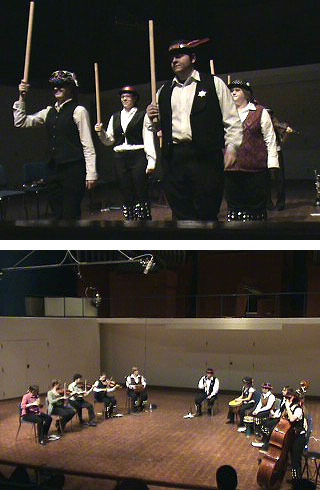 For instance: there’s a big difference between playing a violin and a fiddle; you learn the timber flute or the penny whistle rather than using the classical silver flute.

There is an Irish frame drum called the bodhrán. It is very different from anything else I’ve played. I hold it in my lap, supported with my left hand, and I play it with a stick called the tipper in my right hand.

When you’re classically trained, you’re trained to have certain movements – certain stylistic approaches. For percussionists, there is a basic style you can always default to: it’s a motion like you’re bouncing a basketball, just an up-and-down movement of the wrist. When approaching the bodhrán, I can’t use that because the way you hold the stick and the way you use the instrument is so completely different.

But learning these new styles makes you more versatile; it makes you have to think about what you’re doing, because you can get in a rut with any music you’ve played for a while.

This is true with any type of music you play: no two performances are ever going to be the same.

Something is either going to go wrong or something will go better than it did before … a million different things might happen. The lights might not come up, an instrument’s string could snap, or there’s my biggest fear: the head could break on my drum.

It’s our reaction to those situations and how the audience supports our reaction that determines to a great extent how well the performance goes. In a concert setting, audience reception is how we gauge how well we are playing. The same is true if you’re in a symphony, a musical, whatever. We can tell a lot by the posture and facial expressions of our audience; by the intensity of their applause.

With Celtic Christmas, we’ve always had good reception. The audience loves to get into the performance. We’re very pleased that so many people take so much of an interest in what we do.

In the Celtic tradition – the Irish tradition particularly – you could take the same basic tune, have 50 different people perform it, and you would never know it’s the same tune. That’s how this music works, every performance is going to be different.

We are basically concertizing a traditional music, so our performance is naturally going to be a little bit stylized. But the way we learn, the way we approach our instruments, we try to stay true to the music’s original purpose.

We hardly ever learn pieces by reading music. We learn everything by ear, which can make things a little interesting, we can have our own take on the song.

I also dance in the Celtic Ensemble and I’ve never done dance in my life.

Most of us haven’t.

There aren’t many people – maybe one or two people – in the ensemble who have danced, but in some ways that’s a good thing. We have a clean slate to work from. We can say, “Okay, this is how they would have learned it. This is the step they would have taken, this is why they made that step.” We learn how the dancing works with the music, which is the most important part because we’re all musicians and that’s how we understand things. It’s like a completely different language and if we can relate something to it, then we have a better understanding of it.

One of a Kind

The Vernacular Music Program here is small, but it’s a great opportunity; it takes us out of the whole orchestra-symphony-marching-band mold. For those of us who like world music or any folk-type music, it allows us to study that as opposed to the classical stuff we’ve been exposed to.

For being where we are in the country – West Texas of all places – the fact that we have the Caprock Celtic Association, that we have this awesome group of people who get together and go and play this traditional music, really says something about the people who work at Texas Tech. It says something about Dr. Smith (founder and director of the Vernacular Music Center). Dr. Smith loves this music, and we all love this music because of him; he gave us an opportunity no one else around here would have given us.

I think it really says something about what Celtic Christmas is, the fact that you have all these people who are getting together and saying, “You know what, we love this music. This is something that we do for fun, some of us do it for a living, and we can all enjoy it in a Christmas setting with our funny plays or more serious ballads and we can all enjoy it. That’s the heart of this music.