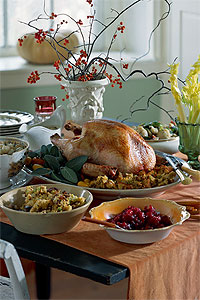 Our food safety expert dishes on how to cut out food poisoning this Thanksgiving ... cold turkey.
As the holidays approach and family members flock for an extended reign of chaos, the last thing a host or hostess needs is an outbreak of food poisoning to dampen the festivities. Texas Tech University food safety expert Mindy Brashears has a few tips on how to make sure it's the football scores – not your turkey – causing stomach pains.

The rule of thumb goes like this: heat poultry to 165 degrees to kill bacteria. But is that really enough to ensure the Thanksgiving turkey is pathogen free? Well, sort of. See, the problem is, it's not so easy with turkey, which carry a bacteria called Clostridium perfringens – a common cause of food poisoning, said Brashears, director of Texas Tech's International Center for Food Industry Excellence. While cooking turkey to 165 degrees will kill the living C. perfringens (as well as other harmful bacteria, including Salmonella), Brashears warns that their spores will survive a trip through the oven. And, while the spores aren't harmful as long as they don't change back to the vegetative state, warm turkey can act as an incubator if left sitting out too long. "Even if your turkey is cooked well, it can cause problems if you leave it sitting out all day," she said. The same is true of gravy and stuffing that have turkey in them. Brashears recommends chilling leftovers quickly after the meal is finished. Cut meat off the bone and store perishables in shallow pans – any deeper than four inches will keep the food from cooling fast enough – to prevent the reemergence of bacteria. Brashears also advises reheating leftover turkey to 165 degrees and bringing gravy to a boil. "You want to avoid keeping food in what I call the temperature danger zone," she said. "Either keep it cold or keep it hot."

Take Some Time to Thaw Out

With all the confusion of holiday activities, sometimes trying to plan ahead can be a lost cause. Thawing is one area where a little foresight can pay off. The best method? In an ideal world, all turkeys would be thawed out in a refrigerator, Brashears said, to keep bacteria to a minimum. Thawing a large turkey this way can take days, though, so Brashears advises that the household chef use a sink full of cool water. Change the water out every four hours or so and be warned: thawing a large turkey this way can take as long as 48 hours, so budget a day or two. One dangerous common practice: Cooking the turkey at a high temperature for one hour and then turning off the oven to allow the turkey to cook as it cools down overnight; Brashears advises against it. "A lot of recipes call for that method, but I see that and I think, "Eek!'" Brashears said. "You are essentially incubating the bacteria."

Some of the biggest health threats in the kitchen are also among the most ubiquitous: sponges, rags, cutting boards, utensils and, you guessed it, the counter. "Cross-contamination is one of those things that is easily avoidable but still happens all the time," she said. Be sure to wipe down counters, cutting boards and utensils that have had raw meat on them, Brashears said. Use soap and hot water or, preferably, a sanitizer – especially if preparing to chop fruits or vegetables that will be served raw. Also, keep in mind: a sponge or dishrag only helps clean so long as it isn't contaminated. Otherwise, it is just another instrument for spreading germs. So toss the dirty ones in the dishwasher or laundry pile once they've been used.

As any kid will attest, licking from the bowl is half the fun of making cookies. Yet the cookie dough on your finger could be brimming with bacteria; same with the eggnog in your cup. While dough and eggnog bought ready-made at the store should be safe, Brashears said shoppers should be sure to purchase pasteurized eggs to use in their homemade recipes.

'Moovin' Along: New Grant to Help Protect Against Harmful Bacterium