Two students from the Department of Agricultural Education and Communications were among six selected to hold a national office. 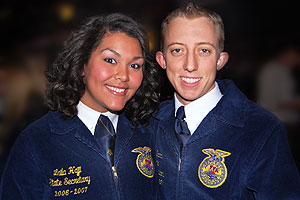 Two students from the Department of Agricultural Education and Communications will serve as 2008-2009 officers for National FFA. Riley Branch, an interdisciplinary agriculture major from Aspermont, was chosen as national vice-president representing the Western Region; Laila Hajji, an interdisciplinary agriculture major form Guthrie, Okla., was chosen as national vice-president representing the Central Region. “Understandably, our department is ecstatic about their accomplishments,” said Scott Burris, assistant professor in the Department of Agricultural Education and Communications. “It is rare to have two national officers from the same institution, much less the same department.” The students were among six selected to hold a national office from a field of 38 at the 81st National FFA Convention in Indianapolis. Branch and Hajji will serve more than 500,000 fellow FFA members and travel more than 100,000 miles meeting top leaders in business, government and education. Responsibilities include providing personal growth and leadership training for students, setting organization policies and promoting agricultural literacy. The National FFA officer selection process assesses academic and extracurricular accomplishments made by each student running for office. Nominees must first qualify on the state level to represent particular state FFA associations. The National FFA Organization, formerly known as the Future Farmers of America, is a national youth organization of 500,823 student members - all preparing for leadership and careers in the science, business and technology of agriculture. There are 7,358 local FFA chapters in the United States, Puerto Rico and the Virgin Islands.

The department consists of undergraduate and graduate programs in interdisciplinary agriculture, agricultural communications and agricultural education.