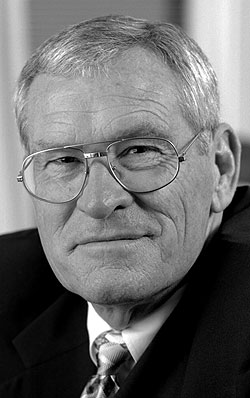 Alumnus Edward E. Whitacre Jr. retired as CEO of AT&T Inc. in June 2007. During his time there, he helped grow the company into the world’s largest communications company, re-shaping the telecommunications landscape.

With a reported worldwide shortage of engineers and graduates in related fields, Texas Tech University and AT&T Inc. are doing their part to ensure a first-class engineering education for students in the coming decades.

“America’s future competitiveness depends on the strength of our nation’s educational system,” said Randall Stephenson, AT&T chairman and chief executive officer. “Ed Whitacre is a long-time and strong advocate for education at every level. I can’t think of a better way to recognize his leadership and support of education than by establishing a lasting legacy with the Whitacre College of Engineering at Texas Tech.”

Whitacre, a 1964 Texas Tech industrial engineering graduate, credits much of his success to the quality education he received at Texas Tech, and it is his dream that future students have the same opportunity.

Chancellor Kent Hance, and long-time friend of Whitacre, thanked AT&T for its gift and for the opportunity to honor the outstanding businessman and alumnus.

“Texas Tech University has no better friend or loyal supporter than Ed Whitacre,” said Hance. “AT&T’s gift will allow the Edward E. Whitacre Jr. College of Engineering to remain on the cutting edge of engineering education by positioning it to attract a diverse and quality student body, and to educate future college students about possible engineering careers.”

In 1985 Texas Tech named Whitacre a distinguished engineer of the College of Engineering. He was appointed to the Board of Regents in 1993, and was chairman from 1995-1998. In 1996, the Rawls College of Business honored him with the Outstanding Chief Executive Award.

Whitacre was instrumental in securing some of the largest gifts to the university, including contributions from the SBC Foundation to create endowed scholarships and endowed faculty positions at the university. At the request of then-Chancellor John T. Montford, he served as national campaign chairman for Texas Tech’s Horizon Fundraising Campaign from 1996 to 2001.

“I’ve had the unique opportunity to work for Mr. Whitacre as chancellor of Texas Tech and as a part of AT&T,” Montford said. “His drive and winning spirit embodies everything associated with this university and its world-class engineering program.”

A native of Ennis, Texas, Whitacre began his career at Southwestern Bell Telephone in Lubbock in 1963. He progressed through a series of assignments in the company’s operational departments in Texas, Arkansas and Kansas.

From 1982 to 1985, Whitacre headed Southwestern Bell’s Kansas Division, and then moved to corporate headquarters where he served as group president, vice president-revenues and public affairs, and vice chairman and chief financial officer. In October 1988, Whitacre was made president and chief operating officer, responsible for the company’s six primary subsidiaries. In 1990, he became chairman and CEO of SBC, which changed its name to AT&T in 2005 after SBC acquired AT&T Corp.

During Whitacre’s 1990-2007 tenure as chairman and chief executive officer, the company differentiated itself through diversification, a disciplined growth strategy and strategic mergers and acquisitions. Whitacre retired in 2007.

University Administrators announce the new name of the College of Engineering in honor of Edward E. Whitacre Jr. Watch Video.