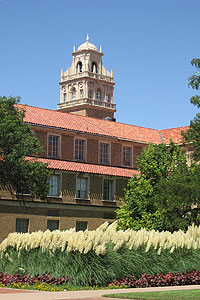 Grounds Maintenance is responsible for providing an aesthetically pleasing campus for the community. Photo by Kristina Woods Butler.

Texas Tech University has been acknowledged for many facets ranging from research to athletics and now, aesthetics. The university recently received highest honors for the second year in a row for maintaining beautiful grounds.

The Professional Grounds Management Society (PGMS) recognized Texas Tech with a Grand Award in the society’s 2008 Green Star Awards competition. The award was given in the Urban University Grounds category for exceptional grounds maintenance. In 2007, Texas Tech received an Honor Award in the Green Star Awards Competition in the University and College Grounds category.

“On behalf of the Grounds Maintenance Department, I was very pleased to accept this Grand Award from PGMS,” Gene Gibson, director of Grounds Maintenance said. “The award was attained by the hard work of many dedicated employees who take great pride in the appearance of the university.”

Because of its functional, creative and elegant landscaping, the campus has been awarded top honors for maintaining a beautiful environment. By choosing plants specifically for each season, the campus maintains thriving blossoms all year round, said Gibson.

Offering 21 pieces of public art accessorized with complementary flower gardens and lush colors, the society called the campus’ landscape “a work of art in itself,” and MSNBC deemed Texas Tech one of the “Top Five Prettiest Campuses in the United States.” The Public Art Program, which was instituted by the Texas Tech Board of Regents in 1998, brings the campus to life by displaying artwork that reflects the institutions educational philosophies.