Get Your Guns Up this Holiday

Each year a new ornament depicting a Texas Tech icon is available to Texas Tech supporters. 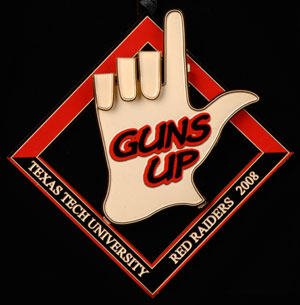 Each year a new ornament is available so that Texas Tech supporters can collect the entire set.

The official Texas Tech University 2008 ornament is the 12th in a series of ornaments that began in 1997.

The Guns Up sign can be traced back to L. Glenn Dippel, a 1961 alumnus of Texas Tech. He and his wife Roxie were living in Austin and faced the daily presence of the “Hook ’em Horns” hand sign used by University of Texas fans. So, the Dippels decided to retaliate. They looked to mascot Raider Red and his raised guns for their inspiration and in 1971 developed the Guns Up hand symbol. The Saddle Tramps and the Texas Tech cheerleaders immediately adopted Guns Up and a new tradition was born.

A new ornament is designed each year and depicts something unique to Texas Tech. Past designs have featured the Masked Rider, the Double T and the Administration Building bell tower. The ornaments are sold year-round.

To purchase this year’s ornament, or the whole set, visit www.ornaments.ttu.edu or contact the Office of the President at (806) 742-2121. The ornament sells for $20 plus shipping and tax.