What It Feels Like... To Lead the Goin' Band from Raiderland

Drum Major Steve Novak discusses the intricacies of conducing a band through media timeouts and the pain of learning how to goose step. 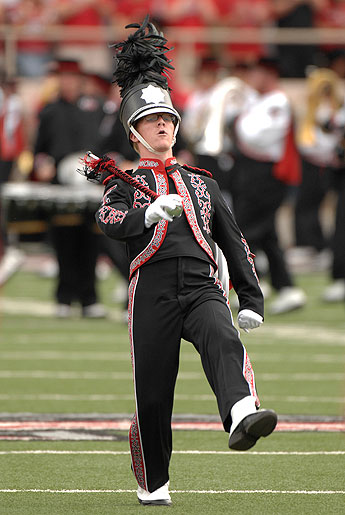 Steve Novak is one of two drum majors who lead the Goin’ Band from Raiderland during football games. He discusses the intricacies of conducting a band through media timeouts and the pain of learning how to goose step.

Goose stepping: the first few times I tried it, I hurt my groins and hamstrings. Even my butt. For a week straight, I could feel the muscles where they tore because I didn’t know how to stretch right or how to even do it yet. You’ve got to be pretty limber, that’s for sure.

It helped that I danced for around 15 years. Until I graduated high school, I did ballet, so the flexibility has been an advantage for me.

The first time I goose stepped during a game: I don’t remember any of it, really. I was on such an adrenaline rush. My biggest fear was tripping and falling, especially with that cape dangling behind me. I had this image of either tripping or leaning back too far and going down.

I still don’t feel comfortable with it. It’s one of those things I don’t think you ever will. But you get the hang of after you’ve done it for long enough, so now it’s just a matter of getting out there and doing it.

As long as you don’t do it too hard you don’t pull anything.

Early season, though – those 6 p.m. games – the four drum majors will get to the Music Building around 8 or 8:15 just to make sure everything’s ready.

After practice we’ll go to the stadium and unpack our things. Then we just get the heck out of dodge. My parents always come up for the game so we’ll go to lunch.

We get back to the Music Building around 3 p.m. for uniform checkout. We’ll have a final rehearsal right before the game, make sure everything’s good.

Then we get everyone in parade block and we march over to the stadium and do the gig.

Conducting the Band in the Stands

We have our little hand signals, or numbers, for the music – have to make sure everyone knows what we’re going to play.

My first game was kind of rough because Mr. Anderson has been trying to give the drum majors more responsibility for conducting the tunes the band plays while it’s in the stands.

Needless to say, there’s a learning curve. It’s a pretty steep one, with the media timeouts and everything else that goes on in the stadium.

There’s so much activity, we actually have somebody with a radio plug-in talking to the stadium officials. They’re telling us “okay, we have a media timeout, we have one or two promotions, then you can play whenever the heck you want.”

With the media timeouts, we also have to be careful to watch the Big 12 official. He’s standing on the 20 with the big orange sleeves. Once he puts his hand up we know there are 30 seconds to the end of the timeout. I get off the field and it’s game time again.

It’s a bit of an experience, getting up on the podium in front of the whole band and the stadium, but I think we’re getting things pretty well in check.

We’ll be firing on all cylinders at homecoming. Guaranteed.