'Painting the Italian Landscape: Views from the Uffizi' consists of 45 pieces ranging from the 1500s to the mid-20th century. 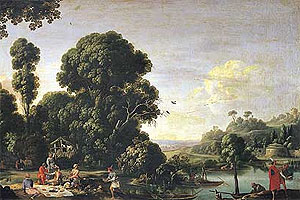 The Museum of Texas Tech University will host the major exhibition “Painting the Italian Landscape: Views from the Uffizi” Nov. 8 - Jan. 4, 2009.

The 45 works, ranging from the 1500s to the mid-20th century, illustrate the evolution of landscape painting in Italy from its earliest roots as merely a background setting to becoming the focal point of a painting.

“The pieces in the exhibition illustrate the progression of Italian landscape painting,” said Gary Edson, executive director of the museum. “The landscapes as represented in the earlier works served as stylized background over which the primary elements were superimposed. Whereas, in later paintings the landscape is a major compositional element, and in some instances, it is the prevailing feature.”

While the exhibition is part art history lesson, it is also an opportunity to see works from Old Italian Masters, such as Botticelli, Guercino, Filippo Napoletano, Nicolas Poussin, Claude Lorrain and Canaletto, from one of the oldest and most famous museums in the world, the Uffizi.

The Uffizi is located in Florence, Italy, the city considered to be the birthplace of the Italian Renaissance. The Uffizi Gallery was built on the banks of the Arno River in 1581 by the Medici family, the ruling family of Florence from the 15th to the 18th century.

“Painting the Italian Landscape: Views from the Uffizi” is the latest in a line of major exhibitions hosted by the Museum of Texas Tech University.  The national travelling exhibition “Anthony Quinn: A Lifetime of Creating and Collecting Art,” is open at the museum through Nov. 30. More than 100 pieces ranging from the Oscar-winning actor’s own paintings and sculpture to artists such as Renoir and Matisse, to African art and found objects he regarded as appealing are on display. The exhibition is free to the public.

In 2002, the museum hosted an exhibition of rarely-seen 12th and 13th century frescos from the collection of the Vatican Museum, which drew about 130,000 people.

The Museum of Texas Tech University is an educational, scientific, cultural and research element of the university. The museum recently received reaccreditation from the American Association of Museums, a designation held by only 774 of the country’s nearly 17,000 museums. Only 108 of those accredited museums are college or university facilities.

The museum also offers master’s degrees in Museum Science and Heritage Management and a wide variety of educational programs for the general public.