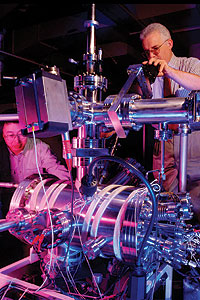 The government funding will support a variety of initiatives including nanophotonics research and the development of electromagnetic pulsed power for military use.

This is the largest amount of defense funding ever received by the system and comes after a year-long effort by officials to increase the levels of federal research grants.

“This is great news for Texas Tech and Angelo State,” Kent Hance, chancellor of the Texas Tech University System said. “We are grateful to our legislative leaders for their support in getting these very important projects funded.”

The Texas Tech portion totaled $6.8 million and covers a variety of initiatives ranging from the development of electromagnetic pulsed power to detonate improvised roadside bombs, to research on nanophotonic devices for application as air and water purification systems and optical communications. The grants also include a joint project with Stephen F. Austin University to develop a regional geospatial mapping center at Texas Tech which will provide information to support emergency operations within the state.

Angelo State University received one appropriation for $2.4 million for projects at its Center for International Studies. The center will utilize the latest technology for instruction in linguistics that will directly benefit Goodfellow Air Force Base in San Angelo by providing instruction in Mandarin and Arabic languages and offering base personnel an educational degree completion program.