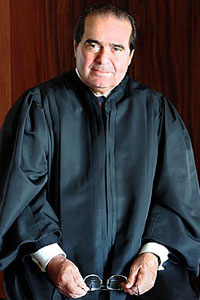 His public presentation is set for 5 p.m. at the Lubbock Memorial Civic Center Exhibit Hall. Scalia, the second most senior associate justice of the nation’s high court, was appointed by President Ronald Reagan in 1986.

The event is free to the public, but requires a ticket for admission. Tickets are available by calling (806) 742-3787 ext. 248 or email specialevents.law@ttu.edu.

“It is always an honor for the School of Law to host a justice of our nation’s highest court, and it is a special privilege to host Justice Scalia,” said Huffman. “His articulate and aggressive defense of his position as a strict adherent to the fundamental principles established by the U.S. Constitution has made him one of the most well-known and often quoted members of the current court, and I am certain his presentations will be informative and entertaining.”

The lecture series is the brainchild of Houston attorney Mark Lanier, a law school alumnus who founded the Lanier Law Firm. He underwrites the series. Lanier also is the benefactor of the recently opened professional development wing of the Law School.

Lanier said that Texas Tech has one of the best law schools in the country, but does not get as much national recognition as it deserves. His firm has offices in Houston, New York and Los Angeles.