Texas Tech researchers estimate up to $517 million in economic losses due to high winds and cool temperatures. 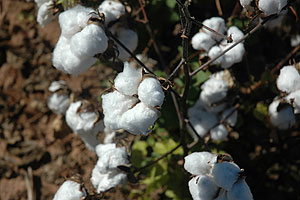 Since 1997, the High Plains has averaged 4.4 million bales produced each year. Researchers estimate the 2008 crop will be around 3.2 million bales.

A new Texas Tech University Cotton Economics Research Institute study indicates that the economic impact of the cotton crop on the Texas High Plains economy will be sharply down this year.

Current estimates suggest a cotton harvest that is potentially 28 percent below average resulting in economic losses between $302 and $517 million in the region.

Since 1997, the High Plains has averaged 4.4 million bales produced each year. This year, Plains Cotton Growers, which serves a 41-county region, estimates the size the 2008 crop will be around 3.2 million bales.

“If these production numbers materialize, the 28 percent drop in production will have significant impacts on the regional economy, especially in terms of a reduction of sales tax revenues,” Hudson said.

Texas Tech researchers used a regional economic impact model known as IMPLAN to examine the crop’s impacts, as well as provide estimates of the effects of the smaller-than-average crop. The model accounts for the direct impacts of lost gross income, and how these losses cause indirect and induced effects from decreased expenditures.

So what does this mean for you? Agricultural economists say the potential impacts of a smaller cotton harvest can be explained in either a worst-case or best-case scenario.

“Based on those same scenarios, a reduction of sales tax revenue between $25 and $46 million is expected, with between $10 and $18 million of that loss falling on Lubbock County,” Hudson said. “To keep these impacts in perspective, the loss in economic activity is between 0.4 percent and 0.7 percent of the total regional economic activity.”

However, he pointed out that while lower than average, this year’s harvest was certainly not the smallest cotton crop in recent history.