Pecans: The Story in a Nutshell

From history to recipes, this book has “Pecans” covered. 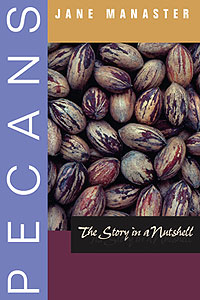 Pecans are a tough nut to crack, but a Texas Tech University Press author has made their history sweeter than pecan pie to read.

Jane Manaster’s “Pecans: The Story in a Nutshell” is a fun, fast read for anyone who grows, sells or just loves to eat pecans.

The book covers all things pecan – history, cultivation and the many uses of the pecan tree and nut – but it is also laced with fun facts, such as how the nut got its name: it’s an Algonquian Indian word meaning the nut too hard to crack by hand.

Pecans have long been a favorite food across the globe, so popular that Thomas Jefferson once wrote home asking that some of the nuts be shipped to him in Paris. The book, updated this year from its original 1994 publication, follows the cultures caught up in the pecan story – Native Americans, Spanish explorers, European immigrants, African-Americans and Mexican-Americans.

Manaster also documents the successes of commercial growers in extending the pecan’s original range eastward from the Mississippi basin to Florida and westward to California. She charts the growth of the commercial pecan industry, especially in Georgia, Texas, New Mexico and Arizona.

When she first wrote “Pecans,” Manaster says the nuts weren’t something she was thinking of, she was just looking for a new writing project and pecans was the topic offered by the publisher.

“I knew nothing about pecans – not even that they were native to the United States,” Manaster said. “I’m from England and had seen them only in very top-end foodie places. Having to start from scratch and explore the whole story made the project especially interesting.”

Manaster says she’s not much for following recipes, “they are just too involved.” But she includes nearly two dozen traditional and modern recipes in her book and even delves into who may have made the very first pecan pie. 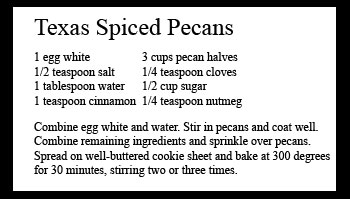 Today, the United States produces 80 percent of the world’s pecans. While Albany, Ga. is known as the pecan capital, Texas made the pecan tree its state tree in 1919. Texas Gov. James Hogg liked the tree so much he requested one be planted at his gravesite. Pecans are widely appreciated, from television cooking shows to gourmet shops. And, of course, they’re still the mainstay of the Stuckey’s roadside stores, whose history is touched on in the book.

A freelance writer and geographer, Jane Manaster lives in Austin. She is the author of several works, including "Horned Lizards" (TTUP, 2002) and "Javelinas" (TTUP, 2006).

Texas Tech University Press, in business since 1971, publishes nonfiction titles in the areas of natural history and the natural sciences, eighteenth-century and Joseph Conrad studies, studies of modern Southeast Asia – particularly the Vietnam War, costume and textile history, and all aspects of the Great Plains and the American West – especially biography, history, memoir and travel. In addition, the press publishes poetry and regional novels with national appeal.