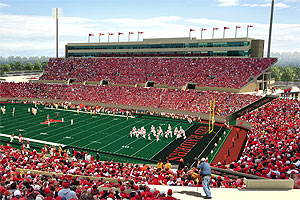 Capacity at Jones AT&T Stadium should grow by about 1,000 seats due to the east side expansion. The facility is expected to open for the 2010 season. Read More.

The $25 million fundraising effort for the expansion of Jones AT&T Stadium, which has received overwhelming support from Red Raider fans and the community, is entering the final phase. With the goal in sight, a final drive to secure the remaining funds is underway.

Texas Tech University System Chancellor Kent Hance said almost $5 million has been raised since the campaign was announced on Aug. 7. Combined with previous gifts the total now stands at approximately $24 million. The remaining $1 million must be raised in the next five weeks in order to break ground at the end of the season.

“The response to this fundraising effort has been tremendous and we are thankful to all our generous donors. We are close to reaching our goal and need all those who have been planning to give to make that donation today so we can finish the campaign and start construction as soon as football season ends,” Hance said.

The design of the new east side structure will complement the Spanish Renaissance style of the stadium’s west side. With the addition of more than 500 club seats and more than 20 new suites, capacity at Jones AT&T Stadium should grow by about 1,000 seats. The facility is expected to open for the 2010 season.

“Once again, our fans have stepped forward and proved why they are the greatest in college football. Through their generous donations we will continue to enhance what is already one of the greatest home atmospheres in the country,” said Mike Leach, Texas Tech head football coach. “We are excited about the direction in which the stadium construction is progressing and look forward to the increased enthusiasm that these new areas will provide.”

If you are interested in learning more about how you can make a difference, please contact Andrea Long Tirey, director of athletic development at (806) 742-1785 ext. 231 or visit www.give2tech.com.

If you are interested in suites and club seats contact Steve Uryasz or Amy McBride at the Red Raider Club at (806) 742-1196.