2008 Homecoming Week sure to provide great food, fun and entertainment with annual bonfire, parade and much more. 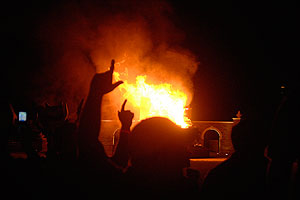 Homecoming brings alumni, students and fans together to celebrate the history, spirit and traditions of Texas Tech. Homecoming dates back to 1930 when Texas Tech lost 20-6 to Hardin-Simmons. Photo by Artie Limmer.

Visitors to campus will see spirit board displays all week at the Broadway Avenue entrance and also banner displays at the Student Union. The top three Greek and top three student organization banners will be displayed at Jones AT&T Stadium on game day.

The university will host a Homecoming Food Drive from 8 a.m.-5 p.m. Thursday and from 8 a.m.-noon Friday in the C-12 North Commuter Parking Lot.