Support Habitat for Humanity, get your black on for this weekend's game and buy a house. 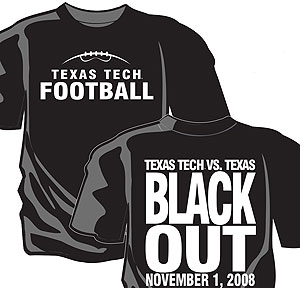 Buy a shirt, help black out UT and support Habitat for Humanity. On sale Oct. 27-31 at the Student Union Building.

Red Raider fans can support Habitat for Humanity and help blackout the Nov. 1 showdown with the University of Texas by purchasing T-shirts from Texas Tech University’s Panhellenic and Interfraternity Councils.

The councils will sell the T-shirts Oct. 27-31 at the Student Union Building in an effort to cram Jones AT&T Stadium full of black-clad fans for the televised game, which will feature two top-ten teams.

Proceeds will go toward raising $45,000 to build a Habitat for Humanity home during Greek Build 2009.

Texas Tech’s sororities and fraternities are responsible for raising $15 per member for the spring community service project. Over three days in March, their members will work together to build a house for a family from Habitat for Humanity.

The Panhellenic and Interfraternity Councils serve as the governing bodies for Texas Tech’s 11 sororities and 23 fraternities, respectively.

For more information contact Cate Bibb, assistant director for the Center for Campus Life at (806) 742-5433.

ESPN College Gameday built by The Home Depot is heading to Lubbock and will broadcast Saturday from the Texas Tech campus, ESPN officials confirmed Sunday morning. Hosts Chris Fowler, Kirk Herbstreit, Lee Corso and Desmond Howard will anchor the show, which will air prior to Texas Tech's showdown with in-state rival No. 1 Texas. Read More.