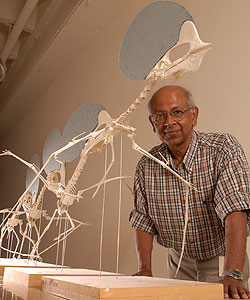 According to Chatterjee, Pterodactyls lived 228 to 65 million years ago. Their sizes ranged from a sparrow to a Cessna plane with a wingspan of 35 feet.

Texas Tech University paleontologist Sankar Chaterjee and Rick Lind, an aeronautical engineer from the University of Florida, have developed a 30-inch robotic spy plane modeled after a 225 million-year-old pterodactyl.

The drone, featuring a strange design of a rudder at the nose of the craft instead of the tail, would gather data from sights, sounds and smells in urban combat zones and transmit information back to a command center.

According to Chatterjee and Lind, this project will demonstrate a next-generation capability of sensor emplacement using a pterodactyl as the model animal.

The unmanned, sensor-packed craft in development could soon be demonstrated using existing materials and actuators, the researchers said. Pterodrone, the military’s next generation of airborne drones, won’t just be small and silent – they will alter their wing shapes using morphing techniques to squeeze through confined spaces, dive between buildings, zoom under overpasses, land on apartment balconies or sail along the coastline for surveillance.

Pterodactyls lived 228 to 65 million years ago from the late Triassic Period to the end of the Cretaceous Period, Chatterjee said. They dominated the Mesozoic sky, swooping over the heads of dinosaurs. Their sizes ranged from a sparrow to a Cessna plane with a wingspan of 35 feet. Their bodies featured lightweight bones and an intricate system of collagen fibers that added strength and agility to their membranous wings.

“These animals take the best parts of bats and birds,” Chatterjee said. “They had the maneuverability of a bat, but could glide like an albatross. Nothing alive today compares to the performance and agility of these animals. They lived for 160 million years, so they were not stupid animals. The skies were darkened by flocks of them. They were the dominant flying animals of their time.”

Tapejara wellnhoferi, a pterodactyl from Brazil, featured a large, thin rudder-like sail on its head that functioned as a sensory organ. Though as big as a Canada goose, its strange design made it stand out from the Cretaceous crowd when it came to flying. This design showed promise as a model to develop into an unmanned aerospace vehicle called Pterodrone, which has superior agility to perform missions requiring aerial, terrestrial and aquatic locomotion.

Putting the tail at the nose of an airplane would seem like a failed design. However, Chatterjee’s research into Tapejara’s flight showed that the rudder acted similarly to a flight computer in a modern-day aircraft and also helped with the animal’s turning agility.

“Since the discovery of a complete Tapejara in Brazil about 10 years ago, we’ve found they could actually sail on the wind for very long periods as they flew over the oceans,” he said. “They spent most of their time hunting for fish. By raising their wings like sails on a boat, they could use the slightest breeze in the same way a catamaran moves across water. They could take off quickly and fly long distances with little effort.”

Similarly, the drone will sail in the same manner.

Initially, Lind said he had his doubts about creating a drone built with a tail at the nose of the aircraft.

“A vertical tail on the head is a destabilizing influence, so we immediately questioned how Tapejara could survive in that configuration,” Lind said. “The issue of flight control becomes quite relevant as the animal, and thus aircraft, must alter its flight properties to take advantage of the turning capabilities presented by this vertical tail and yet remain stable.”

Chatterjee and Lind used computer simulation models and, based off the complete skeleton of the Tapejara, were able to unlock the secrets of flight from this strangely shaped flying animal.

“Sankar actually contacted me about three years ago after seeing a story on the Discovery Channel on our bird-inspired aircraft to inquire if a pterodactyl-inspired aircraft could also be feasible,” Lind said. “We shared some discussions for a while and then finally got serious this year once we had a common concept and could build upon that foundation.”

Bio-inspiration has led surprisingly to a wide variety of robotic design, especially small Unmanned Aerial Vehicles (UAVs) for urban environment that have taken cues from birds, bats and insects. Compared with a fixed-wing aircraft, a pterodactyl wing is a complicated structure of skin, hair, muscles, tendons, blood vessels and nerve tissue.

A team of students from the University of Florida will begin building the aircraft this fall. Chatterjee and Lind have submitted a joint proposal to The Defense Advanced Research Projects Agency at the Department of Defense, which is currently under review.

Sankar Chatterjee is the curator of paleontology at the Museum of Texas Tech and Horn professor of Geosciences and Museum Science in the College of Arts and Sciences.

A Theory of Flight