From his photography beginnings at Texas Tech, alumnus Wyman Meinzer has always had an eye for capturing the essence of nature through a different light. 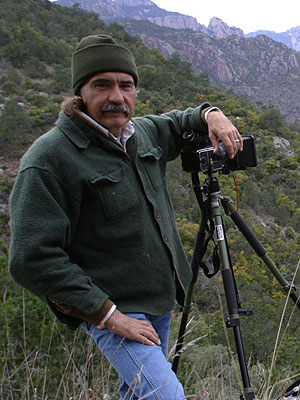 Wyman Meinzer was named the official photographer of Texas in 1997 by the Texas Legislature and then-Gov. George W. Bush. In 1999 he gave the commencement speech for Texas Tech University. Click to Enlarge.

The swelling West Texas storm clouds bruised the sky above Wyman Meinzer's house in Benjamin. But Meinzer could see only beauty in the storm as the color from the sunset came up, hit the clouds and swept across the pristine grasslands. Meinzer grabbed his camera and headed out for a drive with his wife.

“I was so happy because I was going to be able to show someone this and blow their minds,” Meinzer said. “That was the neatest feeling, to be good enough to communicate with the camera, that I could expect the same response from the viewer that I had, to create that kind of emotion.”

This West Texas-bred cowboy has always loved the outdoors and Texas with a passion infused in all of his work. Named the State Photographer of Texas in 1997, Meinzer has published 19 books and his work has appeared in numerous national and award-winning magazines, such as Time, Newsweek and National Geographic. Despite all of these accomplishments, which Meinzer chats about casually with a matter-of-fact tone, the best part of his job is that he gets to spend his time with the things he loves – the outdoors and photography.

In 1969, Meinzer knew just what to zoom in on when he started his undergraduate degree at Texas Tech. The university had an outstanding wildlife department; Meinzer eagerly enrolled hoping to specialize in his particular interest: coyotes. Then an instructor literally handed him another career option – a 35mm camera.

“Right away, I recognized what could be accomplished with a camera, but I knew there was more I could do,” Meinzer said. “My wife tells me all the time: ‘you are so blasted focused ... if it is something you want to do, you zero in and focus until you learn it,’ and that's what I did. Photography was all I could think about. I wanted to be the best.”

After graduating in 1974 with a Bachelor of Science degree in wildlife management, Meinzer took a picture-perfect, three-year-long sabbatical to live among the coyotes of his studies and work on his photography. He moved into a half-dugout on an associate’s ranch, working alone most of the time.

“It’s hard to explain to someone who hasn't been there, you have to be a different cat to appreciate it,” the six-foot-tall Meinzer said, leaning back in his chair.

“I was out there for weeks at a time with no other person, a half dugout with no electricity, no running water. I had hundreds of thousands of acres to roam over freely, and I could see all kinds of gorgeous sights and weather patterns. I got to be a student at a very basic level once again.”

Shooting for the Top

After his three-year photo shoot in the wilderness of West Texas, Meinzer accepted a research position at Texas Tech and continued to develop his photographic talent, submitting images to magazines around the country and asking for advice.

“I never had formal training,” Meinzer said. “So I did a lot of stumbling. I got my equipment on campus, so I would hang out and talk shop with the other photographers.”

His vision paid off and by 1985, he was known all over the country. Sports Afield magazine called him part of the new breed in American nature shooters ... who had a different look, a different approach to the art. 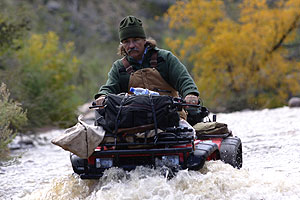 Every year, Meinzer tries to spend time reconnecting with his roots near Knox County. Click to Enlarge.

“I was told from the very beginning I had a very interesting approach to the use of light,” Meinzer said. “And because of my love for the outdoors, I would see things the average person could never expect to see.”

In between photo shoots for magazines and books, Meinzer shares his knowledge with the next generation of photographers at Texas Tech.

Meinzer started teaching in 2000 and now co-teaches one of the most popular photography courses at the university: Special Problems in Photography. Even more sought-after is Meinzer’s intersession course on the Junction campus. In this two-week course, professors and students spend all day, every day out in the field working on their skills.

“I always tell them, chunk your boyfriends, chunk your girlfriends, because for two weeks you are going to live and breathe photography,” Meinzer said with a laugh.

The 12-student group completes one field trip where they live together in housing provided by the university and eat the food Meinzer cooks for them. They walk into rivers in the moonlight, waiting for the perfect shot, completely immersing themselves in outdoor photography.

“It's fun to see them come in at first, and then to take those students and elevate them to another level,” Meinzer said. “I also tell them: ‘If you don't think that you can swing it in this business, I am a living example that anyone can do it if they want it badly enough.’”

Meinzer continues living in the land he loves, in the a home he had built called the “Annex,” next to the old jailhouse in Benjamin, which he has turned into a museum of sorts. He still tries to take time off every winter just to reconnect with his roots by hunting and roaming the hills in the rolling plains around Knox County.

Wyman Meinzer co-teaches one of the most popular photography courses at the university: Special Problems in Photography for the College of Mass Communications.