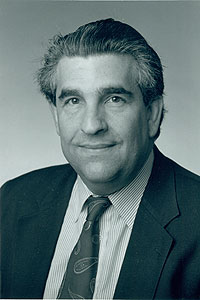 “After an exhaustive search, we chose an experienced director who has captured the essence of every region he’s worked in,” said Jim Brink, associate vice provost for the Heritage Consortium. “Dr. Mandel will bring an intellectual curiosity about our region and a proven track record of encouraging donor support for books that tell our story. He will also continue our well-established traditions.”

Mandel comes to Texas Tech from the University of Alaska Press where he was director. He succeeds Noel Parsons, who retired Aug. 31.

“Texas Tech University Press is a publishing house on the verge of breaking through on the national and international level,” said Mandel. “Noel has done a wonderful job upgrading the quality of TTU Press books and positioning the press as a viable competitor in the field. There are publishing professionals here and I am privileged to join such an experienced group.”

Mandel began his publishing career in 1978 as assistant editor for business and economics at Praeger Publishers in New York City and has worked at Indiana University Press, Wayne State University Press and in 1990 established his own regional publishing company, A&M Publishing. He also has served as chief operating officer and executive vice president for Hodges & Irvine, a niche publisher for the hotel and hospitality industry; as director of Syracuse University Press and the University of Wisconsin Press, he built strong book lists drawing on the academic strengths of the universities and of the regions.

Mandel will first sit down with the press staff and editorial board to develop a five-year strategic plan.

“I want the press to compete aggressively for manuscripts with other Texas presses as well as those in the southwest,” he said. “We will actively seek out the best scholars and writers at Texas Tech and elsewhere.”

Mandel said he wants to form a Friends of the Texas Tech University Press support group to help raise public awareness of press publications and to aid in fund raising. He also will host a series of brown bag lunches around campus to raise awareness of the press.

Texas Tech University Press, in business since 1971, publishes nonfiction titles in the areas of natural history and the natural sciences, eighteenth-century and Joseph Conrad studies, studies of modern Southeast Asia – particularly the Vietnam War, costume and textile history, and all aspects of the Great Plains and the American West – especially biography, history, memoir and travel. In addition, the press publishes poetry and regional novels with national appeal.