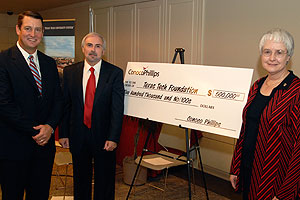 Texas Tech University scholarships, new students and a building campaign will benefit from a $500,000 gift from ConocoPhillips.

ConocoPhillips representatives were on hand as the gift was announced Sept.23. The company’s corporate giving to Texas Tech, including all the associated subsidiaries and matching gifts, totals $4,709,254.

President Guy Bailey lauded ConocoPhillips for its continued support of the university.

“We are fortunate to have such a loyal corporate partner as ConocoPhillips,” Bailey said. “So many opportunities for students and graduates open up when a university receives such outstanding support as Texas Tech has from them, both in funding and in hiring.”

Tom Mathiasmeier, senior vice president of ConocoPhillips Gas & Power, said his company is pleased to have Texas Tech as a continuing university participant in its SPIRIT Scholars program.

“This scholarship program has proven to be a great feeder of talent for our company and we fully expect success to continue at Texas Tech. We are also pleased to support the College of Engineering in the establishment of the ConocoPhillips Academic Success Bridge program,” Mathiasmeier said. “In addition, ConocoPhillips is happy to announce a contribution to aid in the construction of the new building for the Rawls College of Business. We believe all of our support will further enhance the university’s ability to attract new students and continue to develop top talent for the many companies who actively recruit Texas Tech graduates.”

In March 2007, Texas Tech became part of the ConocoPhillips SPIRIT Scholars program, which now includes 315 scholars across eight universities. The SPIRIT Scholars program provides educational opportunities to business and engineering students who have an interest in pursuing a career in the energy industry. The program was created to represent the core values of ConocoPhillips: Safety, People, Integrity, Responsibility, Innovation and Teamwork.

The Bridge Program provides academic support services to entering freshmen engineering students. Bridge Program participants also have opportunities to interact with engineers, scientists and other technical professionals as they look to their own future. Students participating in the program take six hours of credit courses and are housed on campus in Lubbock for one month during the summer before their freshman year.

Funds also will go to the construction of the new Rawls College of Business Building, which will be built on the site where Thompson and Gaston Halls are being demolished. The new business administration building will serve as an anchor for the North Campus Gateway that will be an entrance to the campus from the Marsha Sharp Freeway.