The Answers are Blowing in the Wind 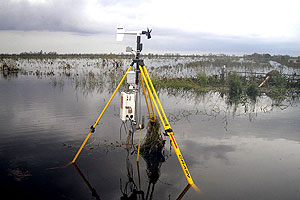 Photo of a Stick-Net probe following Hurricane Ike east of Winnie, TX. The probe experienced about 3.5 ft. of storm surge flooding from 10 miles inland, and collected a complete data record. Click to Enlarge.

Earl. Bonnie. Charley. Michelle. Ivan. Dennis. Katrina. Rita. Gustav. Ike. A familiar roster of names to anyone living in coastal or gulf regions of the United States in the past 10 years.

Texas Tech’s Hurricane Research Team has become intimately acquainted with the personalities of these tempests and the damage and destruction these storms created during the past decade. Hurricane Ike, which devastated Galveston and Houston recently, marks the 27th hurricane or tropical storm the team has researched since Bonnie hit North Carolina in 1998.

John Schroeder, associate professor of atmospheric science, is a charter member and director of the team. He is an expert on how hurricanes interact with man’s built environment at landfall and has been actively intercepting hurricanes since 1998.

However, Texas Tech has been conducting post-disaster investigations since the early 1970s to better understand the interaction and response of structures with wind, he said .

“Our hurricane research team is dedicated to mitigating the effects of landfalling hurricanes on life and property,” Schroeder said. “To that end, we deploy instrumented towers that gather high-resolution storm data at a time when most conventional observation systems fail.”

Of course, though, the technology used in those instrumented towers and observation systems has certainly evolved over a decade.

“In 1998 we had one 10-meter- tall platform. It used to take a team of four about an hour to deploy one observation platform,” said Schroeder. “Now it takes a team of two about five minutes to deploy one of our new platforms, which is 2.25 meters tall, and we have 24 of them.”

“We try to keep a steady group made up of three doctoral students and me. It helps when the individuals have been through several storms and understand the logistics of completing the deployments when the environment is declining.” 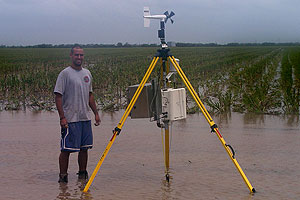 Approaching an oncoming hurricane or tropical storm in that declining environment is all in the timing.

“We try to place everything and get out of the way before the wind gets much above tropical storm force (39 mph). Any later, and things start falling, like tree branches, power lines and other debris, which increases the danger and limits the team’s mobility.”

Shroeder explained that once the team sets its instruments, they head for safety until the storm passes.

“For Gustav we deployed instrumentation from just west of New Orleans to almost Lake Charles, La., but we stayed in Baton Rouge during the storm. For Ike, we deployed platforms east and west of Galveston Bay, and weathered the storm in Katy, west of Houston.”

Many government agencies use the data that Texas Tech’s hurricane team gathers, like the National Oceanic and Atmospheric Administration (NOAA), the Federal Emergency Management Agency (FEMA) and the National Institute of Standards and Technology (NIST). Many private companies which monitor and provide post-storm wind field analysis also use the data. The information helps meteorologists better understand the inner workings of a hurricane, and it is information that engineers can use to design structures that can withstand extreme wind and keep people safe.

Earlier in the year, forecasters said it was going to be an active hurricane season. Schroeder explained how that doesn’t necessarily translate into deployments or media coverage.

“Well above-average activity does not guarantee landfalls, such as in 2007. If you have a year with above-normal activity and no landfalls the public does not care. On the other hand, one major landfall – and everyone remembers.”

The Texas Tech Hurricane Research Team is made up of faculty and students from the Atmospheric Science Group in the Department of Geosciences and the Wind Science and Engineering Research Center.

The team is dedicated to reducing the effects of landfalling hurricanes on life and property through wind science and engineering research.

John Schroeder is an associate professor of atmospheric science in the College of Arts and Sciences and director of the Hurricane Research Team.