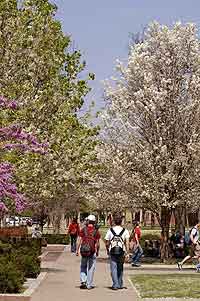 Texas Tech University fall 2008 enrollment is 28,422, the second highest in the school’s history.

“Increasing our research is a key goal for Texas Tech and an increase in the graduate enrollment is vital to achieving that goal,” said President Guy Bailey. “Graduate students not only bring in more state funding, they are the backbone of our research efforts.”

Texas Tech’s freshman class comes to the university with an average SAT of 1113, up 21 points over last fall. More than 21 percent of the incoming freshmen graduated in the top 10 percent of their high school class, up from 17.8 percent last year.

“We are very pleased with the size and quality of this year’s class,” said Kent Hance, Texas Tech chancellor. “The increases we made to our merit based scholarship programs really helped us attract some outstanding students.”

This year’s enrollment increase comes despite record graduating classes in each of the past two years. During the 2007-2008 academic year Texas Tech awarded 6,329 degrees and 6,144 degrees were awarded in 2006-2007.