The Saddle Tramps Tradition: more than 70 years of leadership, spirit and service to Texas Tech. 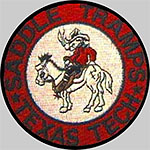 Founded in 1936 by Head Cheerleader Arch Lamb, the group was conceived to promote a positive spirit among the student body.

Its members are committed to elevating the public image of the university through service. Saddle Tramps are available to appear or help out with an event.

They're as much a part of Texas Tech football as, well, the football itself.

You can't miss them lining the sidelines before the opening whistle: the red polos, the black pants, the constant, zealous cheering. And, of course, the unmistakable sound of cowbells clanging as Red Raiders rush the field.

Famous at Texas Tech for school spirit and event coordination, the all-male spirit association is made up of leaders from across the university campus.

"The ideal member is a person with an intense love of the university and the ability to work hard," said Snead, also associate vice president of the Alumni Association. "We obviously look for good men."

The Duties of a Tramp

Saddle Tramps are responsible for ringing Bangin' Bertha at home football games and the Victory Bells in the Administration Building after Red Raider victories. The Tramps participate in other campus traditions, such as the Carol of Lights, and perform numerous community service functions. They help with Homecoming events, stand guard over high-profile spots on campus and become the Midnight Raiders every Thursday night before home football games, wrapping the statue of Will Rogers and painting the campus red and black with streamers.

"Wrapping Will looks really easy, but it is a tough task," said Snead. "It takes 10 guys about two and a half hours. They use about 20 rolls of red crepe paper. Decorating the campus takes another three hours."

The Saddle Tramps started in 1936, the brainchild of head cheerleader Arch Lamb. According to records in the Southwest Collection/Special Collections Library, Lamb was inspired by the stories of saddle tramps throughout history: hired to do multiple tasks based on their willingness to tackle any task assigned to him in order to contribute to the improvement of the ranch.

The initial group only had 10 members, according to records. They wore dark trousers and red shirts, setting the recognizable Saddle Tramp dress code. Now, the current Saddle Tramp posse has 50 members but can number as many as 100.

Setting the Stage for Spirit

However, after some spirited Tramps rang the bells all night long following a victory of TCU, ringing of the bells was limited to 30 minutes after men's and women's athletic victories and special occasions. The Victory Bells - one large and one small - hang in the east tower of the Administration Building.

Mischievous Tramps may have also inadvertently created both of the university's current mascots. According to records from the Center for Campus Life, Lamb and his friend George Tate were the first to borrow a horse from the Dairy Barn and raid a football game in 1936. Tate borrowed a pair of cowboy boots from his roommate and wore a scarlet satin cape made by the Home Economics Department, sparking the idea for the beloved Masked Rider.

In 1971, Jim Gaspard, another Saddle Tramp, created the first Raider Red mascot based on drawings from cartoonist Dirk West. Today, only Saddle Tramps or High Riders are chosen to be Raider Red.

After more than 70 years, the Saddle Tramp mission remains unchanged.

"The Saddle Tramps are dedicated to the improvement and advancement of Texas Tech," said Snead. "They have always been the leaders of spirit on campus."

As founder Arch Lamb put it best, "like the soul of man, you can't put a finger on it, can't draw a picture of it. School spirit just appears when you need it then disappears until it is needed again."