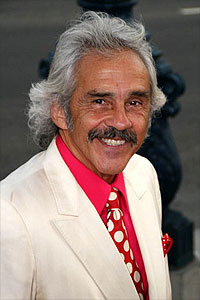 Actor and artist Pepe Serna has appeared in hundreds of television shows and feature films, most notably "Scarface" with Al Pacino.

Pepe Serna will feature his one-man show at 7 p.m. Sept. 18 in the Human Sciences Building room 169. The performance, sponsored by the Office of Institutional Diversity and the Cross Cultural Academic Advancement Center, is free and open to the public.

Serna’s show takes the audience on a journey dating back to the pre-Columbian era and moves forward into the present and future through his cultural exploration of the Chicano experience. Serna’s one-man show is billed as an eye-opening experience that will engage the audience and encourage them to celebrate their own unique cultures.

Serna has appeared in more than 100 feature films and 300 television shows. He has also lent his vocal talents to the Fox series “The PJ's,” which was created by Eddie Murphy and he starred in “Kingpin” on NBC. Serna is best known for his performances in several motion pictures, most notably “Scarface” with Al Pacino. Other films for which Serna is best known include “The Rookie” with Clint Eastwood; “American Me” with Edward James Olmos; “Silverado” with Kevin Costner; and the science fiction classic “Buckaroo Banzi.”

After many years in front of the camera, Serna has taken his talents behind the scenes as an associate producer for the widely acclaimed independent film “Luminarias.” He is also an artist whose paintings reflect the vibrant and tropical colors of Mexico. His works hang in galleries throughout the Southwest. He was recently commissioned by the Los Angeles Annenberg Metropolitan Project and the Mark Taper Foundation to paint an inspirational canvas on the subject of reading. It was turned into a poster and given to students in the Los Angeles Unified School District.

Serna will also host a “Community Conversation with Pepe Serna,” set for 7 p.m. Sept. 17 at the Louise H. Underwood Center, 511 Ave. K. The event is an opportunity for the community to meet and talk with Serna.

The Office of Institutional Diversity supports the univeristy's stretegic plan by fostering an environment of mutual respect, appreciation and tolerance for differing values, beliefs and backgrounds at Texas Tech University.

The Cross-Cultural Academic Advancement Center (CCAAC) connects students, faculty and staff to exciting programs, organizations and events across campus and around the world.