Teacher, Composer and Mentor Honored for her Distinguished Career at Texas Tech 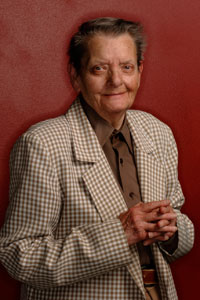 Mary Jeanne van Appledorn's career at Texas Tech which spans 57 years, is one of the longest tenures in university history.
When she began her career at Texas Tech University, it was still a college, Harry Truman served as president and Silly Putty had just found its way to toy store shelves. Mary Jeanne van Appledorn has had a remarkable career, including earning the rank of Horn Professor, as well as international recognition for her compositions and her teaching. The College of Visual and Performing Arts and the School of Music will celebrate one of the longest careers at the university with a concert in her honor Sunday (Sept. 7). The concert and celebration starts with a Carillon performance of van Appledorn's music at 2 p.m. at Memorial Circle and progresses to an indoor concert at 3 p.m. at Hemmle Recital Hall in the School of Music Building. The event will feature faculty members David Dees, Kirsten Yon, Lora Deahl, the Devienne Trio, Amy Anderson and William Westney, along with organist Sigurd Øgaard. A reception in the Lubbock Room of the Student Union follows the brief concert.

Van Appledorn began her career at TTU as chair of music theory and composition in 1950. She earned a Bachelor’s of Music in 1948, a Master’s of Music in 1950 and her doctorate in 1966 from the Eastman School of Music. From 1970-1982, she chaired the graduate programs in the Department of Music and was named Horn Professor of Music in 1989 for her scholarship, creativity and service. Recognizing the significance of her compositions and their annual performance, she received 25 standard awards from the American Society of Composers, Authors and Publishers. She is listed in the prestigious New Grove Dictionary of Music and Musicians, 2nd Edition, 2001; the Baker's Biographical Dictionary of Musicians, 8th Edition; the International Who's Who in Music and Musicians Directory, 1998/99; and the ASCAP Biographical Dictionary.

During van Appledorn’s 57-year tenure at Texas Tech she developed the musical skills of thousands of students who attended her theory and composition classes. Her students hold significant positions in the music profession and credit her years as a composer, performer and scholar for her abilities as a teacher. “Her teaching style of examining the details, being relentless on expectations, comprehensive in her presentations and constantly inspirational in her delivery is manifested in her devotion to students,” said Robert Tucker, a former doctoral student and dean of the School of Music and Fine Arts at Howard Payne University. “ Although she absolutely insisted on accuracy of assignments, she never let the minutiae interfere with the overall product of making music. Applying this practice to life, I learned to be fastidious with the details of my job, my family and my projects without ever sacrificing the higher goals and purpose.” She is a member of ASCAP, Society of Composers International, League of Women Composers, Delta Kappa Gamma (International Scholar, 1959-60), Mu Phi Epsilon, Alpha Chi Omega, Kappa Kappa Psi and Tau Beta Sigma.

The College of Visual and Performing Arts invites you to a concert and celebration in honor of Mary Jeanne van Appledorn and her career, Sunday, Sept. 7.

Admission to both concerts is free and open to the public.