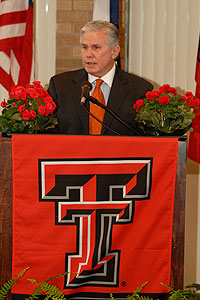 Texas Tech University announced on Sept. 22 the establishment of an industry-supported endowed chair to increase the competitiveness of High Plains agriculture in an economy increasingly linked to international markets and guided by conservation-oriented policy.

The $1 million Larry Combest Endowed Chair in Agricultural Competitiveness will support proactive research focused on boosting the region’s agricultural competitiveness and profits. Local producers will benefit from recommendations and conclusions on issues ranging from pricing to global markets.

Combest has committed to raising funds to increase the endowment, and College of Agricultural Sciences and Natural Resources Dean John Burns said he hopes the chair will someday be the university’s most robust.

“I think the decision to name this chair after Mr. Combest is a tremendous idea,” he said. “No one person at the national level has done more in recent years to promote agriculture in general, and West Texas agriculture in particular, than Larry Combest. The person who holds the Combest Chair will be a vital force in preparing us to compete even more effectively in the global arena and our goal is to grow the endowment until it is the most heavily endowed chair at Texas Tech.”

Hudson, a native of White Deer and a graduate of Texas Tech, will also take over the reins of the university’s nationally-recognized Cotton Economics Research Institute. The program coordinates economic research activities on all aspects of cotton research within the university and other research units throughout the United States and other countries.

“It’s an honor to be selected by my peers for this position,” Hudson said. “It’s a privilege to work with such fine faculty and to serve the Texas agricultural sector.” 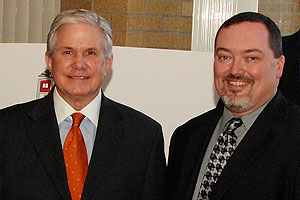 Hudson’s research programs in the past have focused on vertical integration and coordination in agriculture; mergers and acquisitions in agricultural cooperatives; economic and environmental impacts of spatial agricultural technology; economics of investment in remote sensing technology; and commodity market price analysis.

“My research here will focus on both the economics of the cotton industry in particular, and, more generally, analyzing issues to help maintain the competitiveness and economic viability of agriculture in Texas,” he said.

Prior to coming to Texas Tech, Hudson was a professor in the Department of Agricultural Economics at Mississippi State University. In addition from 2006 to 2009, he was a fellow with The Farm Foundation, an Oak Brook, Ill.-based agricultural organization that focuses on economic and policy issues impacting agriculture, the food system and rural America.

Hudson is stepping into the former post of Don E. Ethridge, one of the founding architects of the Cotton Economics Research Institute. Ethridge retired from the university in August after a 27-year career as both ground-breaking professor and chairman of the Department of Agricultural and Applied Economics from 1997 to 2005.

John Burns, dean of the College of Agricultural Sciences and Natural Resources