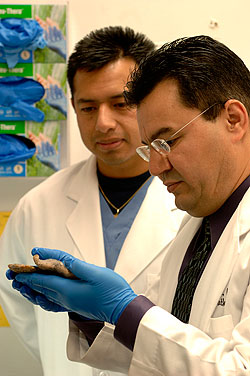 The Research Collaboration Grant is an incentive for scientists from both Texas Tech University and TTUHSC to work together in developing new research efforts.

The two projects demonstrate the collaborative efforts of research between the two universities. This is the third year for the joint initiative grant program, which is designed to provide incentive for scientists at both universities to work together on research projects.

The initiative grew out of discussions between the Board of Regents and university administrators on how to increase research, a priority for the presidents of both institutions.

“The Research Collaboration Grant program continues to encourage multidisciplinary projects between the Health Sciences Center and Texas Tech University which furthers our system-wide goal of advancing research efforts on all our campuses,” said Chancellor Kent Hance. “We are excited to see new areas of academic collaboration being developed between the two universities.”

Proposals for the grants were judged by a panel of external experts and funds awarded based on the projects’ likelihood of generating major extramural funding from sources such as the National Institutes of Health.

Thomas Warren in the TTUHSC’s Department of Surgery and Hamed Sari-Sarraf in Texas Tech’s Department of Electrical and Computer Engineering are developing novel methodologies that learn and incorporate the end user’s knowledge of the problem domain in order to customize the behavior of his/her computer vision solution and improve its efficacy. Image-guided medicine will be one application area that will be used to test these methods.

Kai Zhang, in Texas Tech’s Department of Biological Sciences, and Afzal Siddiqui, in the TTUHSC’s Department of Microbiology and Immunology, are working on ways to inhibit protozoan and parasite infection based on novel combinations of lipids that synergistically act against growth and disease progression. The findings will facilitate the development of new selective drugs to control parasitic infections.