The 2008 Spice Cup, hosted on the Texas Tech campus, brings together the highest rated team of chess Grandmasters in U.S. History. 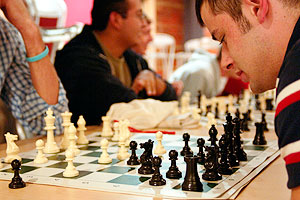 For chess players and fans, the 2008 Spice Cup International Invitational Tournament is the equivalent of the Super Bowl or Wimbledon.

The Spice Cup will be held at the Student Union building Sept. 19-28. The event is a Category 15 Tournament, making it the highest-rated 10-person International round robin event to be held on U.S. soil.

Paul Truong, director of marketing at the Susan Polgar Institute for Chess Excellence (SPICE), said the event shows that both Texas Tech University and Lubbock are making their mark in the chess world.

“To be able to bring a historic event like this here after SPICE has been in existence for only around a year is phenomenal, especially when Lubbock was not known as a chess city,” he said.

Truong said that about 30 million people from all over the world are expected to follow the SPICE Cup.

“In other parts of the globe, chess is much more popular and strong tournaments are organized all the time,” he said. “However, very few prestigious events like this occur in the United States. It means that millions of eyes will be on Texas Tech and SPICE during the festival.”

The tournament, which places the internationally acclaimed players against each other through nine rounds of play in 10 days, will give Texas Tech nationwide and worldwide exposure.

“There will be more people following the SPICE Cup than any Texas Tech football, basketball, baseball or soccer game this year,” he said. “This can serve as a fantastic recruiting tool for Texas Tech. This kind of success is precisely why the university was awarded the highest honor of being named the 2008 Chess College of the Year and Lubbock the 2008 Chess City of the Year.”

Truong said this year’s tournament is three categories stronger than last year’s, and all players are Grandmasters - the highest ranking for a chess player.

Truong credits SPICE's ability to assemble such a strong team, to the reputation of founder Susan Polgar and her standing in the world chess community.