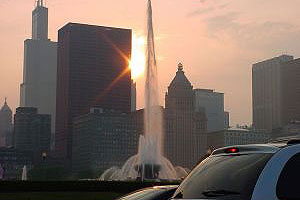 Over the last 20 years, Chicago has experienced above-average annual temperatures, more frequent heat waves, warmer winters and a doubling in the amount of heavy rainfall events.

Temperatures in the Windy City will continue increasing in the next 100 years, largely due to human emissions of heat-trapping gasses. However, the strength of that warming trend and the impact it brings depends on the amount of future emissions produced by the city and the world, according to a Texas Tech University atmospheric scientist.

Katharine Hayhoe, a research associate professor in the Department of Geosciences, co-led a team of more than 20 researchers together with Donald Wuebbles, professor of atmospheric sciences at the University of Illinois. Their analysis studied the potential impacts on Chicago’s people, ecosystems, water resources and economy.

The completion of the study was announced Sept. 18 at a press conference held by Mayor Richard M. Daley at the Shedd Aquarium in Chicago.

The team based the analysis on the latest global climate model simulations, but then used statistical techniques and long-term historical observed climate records to scale down the results and make them more specific to the Chicago region.

“The city asked us to quantify the impacts that could be avoided through reducing emissions, as well as to identify the impacts that are still likely to occur even if emissions are significantly reduced,” Hayhoe said. “Because Chicago’s future climate depends critically on future emissions of heat-trapping gasses, our work examined what might be expected under two very different climate scenarios.”

In the higher emission scenario, Chicago and the rest of the world continue to depend on fossil fuels as their primary energy source. Carbon dioxide levels rise from their present-day levels of 385 parts per million (ppm) to almost 1000 by the end of the century, she said. Chicago summers would feel like Mobile, Ala., does today, with an average daytime summer heat index close to 105 degrees Fahrenheit.

The lower emission scenario focuses on sustainability and conservation. This limits atmospheric carbon dioxide levels to about 550 ppm by the end of the century. Under this scenario, the average heat index during Chicago summers would hover at about 90 degrees Fahrenheit, making Chicago feel more like Atlanta does today. This is still a dramatic change, but Hayhoe noted this lower scenario does not represent a lower boundary on possible futures.

It is probable that timely and aggressive action to reduce emissions during the next few decades could limit climate change to below that projected under the “lower” emissions scenario.

The Price of Progress

The city of Chicago, with a little less than 3 million residents, is the third largest city in the United States. It is responsible for more than 35 million metric tons of heat-trapping or “greenhouse” gases. Adding in the six surrounding counties in the Chicago area increases this to 100 million metric tons per year. This region accounts for nearly half the total emissions of the state of Illinois, with emissions greater than the state totals of more than 30 individual states.

Already, emissions of heat-trapping gasses have changed Chicago’s climate. The city’s temperatures have risen by 2.6 degrees Fahrenheit since 1980, 4 degrees in winter. In 15 of the last 20 years, meteorologists have seen above-average annual temperatures. Many of the defining characteristics of the city are being altered, including more frequent heat waves, warmer winters and a doubling in the amount of heavy rainfall events.

“Although some future changes are unavoidable because of past emissions, the worst of the projected changes do not have to happen if people act to reduce emissions now,” Hayhoe said. “Decisions made by individuals, cities, states and nations are what will determine whether we follow a higher or lower emissions pathway into the future. Through reducing our energy use and preparing for future change, we can help protect our communities, economy and ecosystems.”

Katharine Hayhoe is a Research Associate Professor of Atmospheric Sciences in the Department of Geosciences in the College of Arts and Sciences.